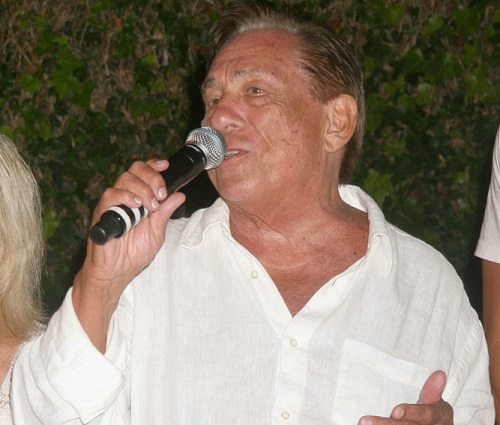 On Sunday, Los Angeles Clippers owner Donald Sterling showed up at Praises of Zion Missionary Baptist Church, a predominantly black church in South Central Los Angeles. Sterling announced that he attended “to support this wonderful group.” Sterling was accompanied by some bodyguards to ward off potential danger in the church visit, but he did go. After the service, Sterling declared it “beautiful.”

It might have been better had he visited the church on his own volition some time in April, after he had gone into a deranged racist rant directed against (and taped by) his purported paramour, V. Stiviano, or even after the release of the tape by TMZ on April 25th, but Sterling didn’t suddenly feel the impulse to show up at a Baptist service until more than a month later.

Unclear is how often Sterling had been caught in the pews of black churches prior to Sunday. The pastor, J. Benjamin Hardwick, invited Sterling and said he doesn’t feel that the Clippers owner is a racist, just that the octogenarian NBA team owner said some things in a conversation in which he had “lost [his] cool,” and who among us hasn’t lost his or her cool at times and “said things that we regret sometimes.” However, Rev. Hardwick acknowledged that he had been approached by “friends” of Sterling a couple of weeks prior to the invitation to attend the church service.

Of course, losing one’s cool doesn’t mean that we devolve into racism, but that might have been Sterling’s distinctive process—and perhaps a reason why sort-of-estranged wife Shelley Sterling has apparently tried to have Donald declared mentally incapacitated.

Hardwick said that his church hadn’t received any money from Sterling, nor has he asked for any. However, Hardwick said in an interview with CNN’s Anderson Cooper that Sterling, “said to me, Reverend, I would like to do something to help the people in this community with you.” It’s not hard to smell the possibility of the billionaire sports owner making a nominal contribution to something in the church community, hardly making a dent in his wallet but starting himself down the redemption road that won him adulation and two lifetime awards from the Los Angeles chapter of the NAACP—especially since, like the NAACP, Rev. Hardwick doesn’t seem to be particularly concerned by the racial discrimination charges that have been historically connected to Sterling’s real estate development business.

Rev. Hardwick is in the business of forgiveness, finding the good even in someone with a history like Sterling. That’s understandable, and perhaps on Hardwick’s part an example of generosity of spirit that would be hard for the rest of us to find, especially toward the likes of Sterling. However, the layer after layer after layer of Sterling’s pre- and post-Stiviano behavior suggests a pretty venal guy whose racial attitudes have been reprehensible long before he complained about Stiviano’s choice of companions. If Sterling’s appearance at Zion Baptist, clearly arranged by Sterling’s “friends” who made the initial contact with Rev. Hardwick, results in some equally artificial charitable giving by the billionaire, it would be good for the church or for any charities Sterling might reward with his situational generosity to think hard about the consequences of what they might say or do in response.—Rick Cohen