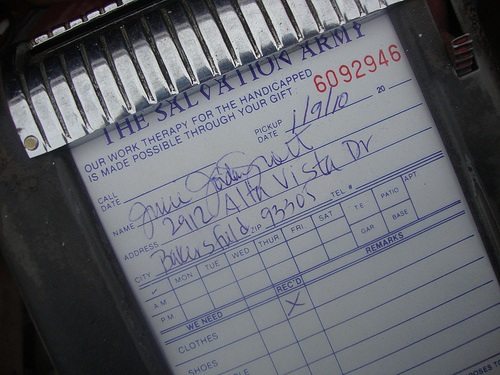 For a donor to claim a charitable deduction, it’s necessary for the charity to issue a receipt or receipts. When the receipt isn’t provided properly, the donor can end up in serious trouble.

David and Veronda Durden are a married couple who made a number of gifts to Nevertheless Community Church (NCC) in Texas during 2007, totaling just over $25,000. The church was recognized by the IRS as a public charity under Section 501(c)3, and the church provided a receipt for donations made by the Durdens. When the IRS challenged the deductions in 2009, the Durdens were able to provide copies of cancelled checks along with the gift receipt from the church.

Unfortunately, the church didn’t follow all components of the four-part test for gift receipts, as detailed in IRS Publication 1771. For each gift to a charity over $250, the charity must document in writing a bank record or written communication, which must be contemporaneous. (This means that you must receive the written acknowledgement before you file your federal income tax return for the year of the contribution or prior to the due date—including extensions—of the return.) The written acknowledgement must state the amount donated, and it must also state whether goods or services were provided by the charity in return. If so, it must state their value, and if the donor received “intangible religious benefits,” the written acknowledgement must state this as well.

The gift receipt provided to the Durdens did not include those latter elements, and the IRS, therefore, refused to accept the receipt as valid. The Durdens argued that the gift receipt, while not technically compliant with the law, was “substantially” in compliance, but the IRS disagreed. The Durdens attempted to submit a corrected receipt from the church, but the IRS rejected that receipt because it was not contemporaneous (in this case, provided by the charity to the donor before they filed their taxes). The US Tax Court heard the Durdens’ case and issued a motion for summary judgment that confirmed the IRS position. The couple was ordered to pay additional income taxes and penalties totaling more than $9,000.

When development officers discuss the proper language to use in gift receipts and thank-you letters, they would be well advised to pay attention to the details of the IRS requirements. No charity or its development officer would wish to explain how their inattention to detail cost a donor a lot of money and stress from IRS proceedings. Would donors like the Durdens have reason to demand that a charity compensate them for the harm they suffered as a result of the charity’s incomplete receipting?—Michael Wyland