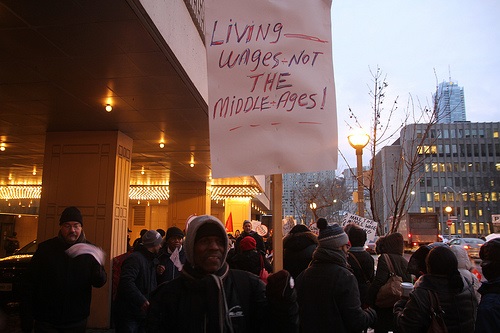 If you had the choice between patronizing a business that paid a living wage and one that did not, which one might you more readily choose? The Durham Living Wage Project, as described in Raleigh’s News & Observer (see above link), encourages local companies and nonprofits to pay employees up to 70 percent above the state and federal minimum wage by certifying them.

Sean Lilly Wilson, for example, owns Fullsteam Brewery, one of the 20 participating businesses. Among the reasons he got involved are that he hopes it will give him better retention of employees, that he was impressed by the project’s well-thought-out platform—and, oh yes, that it is the right thing to do.

Between the campaign’s twenty participating businesses and eight nonprofits, there are more than 692 combined employees covered under the Durham Living Wage Project, which is modeled after Just Economics of Western North Carolina, which has its own Living Wage Employer Certification Program.

Durham city and county governments have already adopted living wage provisions, and the same standards are applied in certifying private employers. Employers must pay at least $12.33 an hour without insurance or $10.83 an hour with insurance. There are even standards for paying independent contractors.

Fullsteam and four other companies increased their wages in the certification process, but Wilson said wage increases are just part of what he needs to do to retain great workers. “In addition to good wages,” he said, “we need good company principles, core values, good leadership and opportunity for advancement.”—Ruth McCambridge