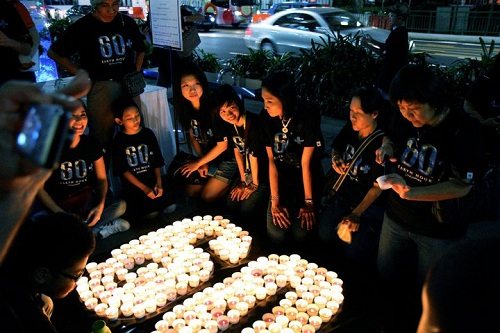 Earth Hour took place on March 23rd. This tradition started on March 31, 2007, when residents and businesses in Sydney, Australia powered down for 60 minutes. A year later, more than 370 cities and towns in 35 countries did the same thing. Last year, Earth Hour witnessed commitments from more than 6,950 cities and towns plus the astronauts on the International Space Station, who joined their fellow humans on Earth in turning off the lights for an hour.

Earth Hour’s website describes last year’s event as “the largest voluntary action for the environment” and Earth Hour calls itself “the largest movement for the planet in human history.”

This year, Earth Hour included new participants turning off the lights in Palestine, Tunisia, Suriname, and Rwanda. Among the internationally known landmarks to have signed on to participate were the Sydney Opera House, the Petronas Towers in Kuala Lumpur, the Eiffel Tower, the Brandenburg Gate, Buckingham Palace, the Empire State Building, Los Angeles International Airport, the Little Mermaid statue in Copenhagen, and Michelangelo’s statue of David in Florence. Did your organization go dark on Saturday? Did you personally turn off the lights?

For nonprofit environmental activists, the question is whether an hour in the dark is an effective action strategy. Critics suggest that that it does nothing to save energy and that it creates an image of “the greens” advocating that people should live in dark caves. In fact, some critics suggest that the process of a massive collection of people turning off and turning on their lights at the same time actually strains power grids and undoes whatever energy savings might have been imagined.

The organizers suggest that the purpose isn’t energy savings, but raising public awareness.  Moreover, there is a sense of methodological individualism in the action, a focus on what you can do as an individual business owner or citizen to save the earth. This year’s Earth Hour was accompanied by a new campaign called “I Will If You Will” in which individuals can pledge to take action on a variety of environmental fronts if others do the same. For example:

“Nate will give up eating meat for a week if 500 people have at least one vegetarian meal a week till the end of this year.”

“We will go paperless for the rest of the school year if 1,000 people will plant a tree.”

“Pevita Pearce will sleep without air con for a month & plant 100 baby trees if 10000 people throw trash in the garbage bin or reduce their use of plastic bags.”

Earth Hour is hardly a tiny environmental group, and the World Wildlife Fund serves as a co-sponsor of this international event. Is Earth Hour effective environmental advocacy and mobilization or well-meaning but fruitless feel-good symbolism? Tell us what you think.—Rick Cohen