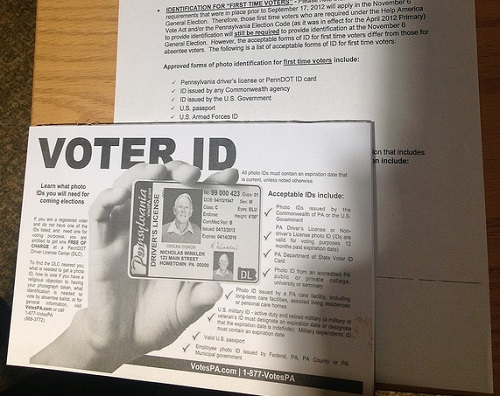 Earlier this month, President Obama told CBS’s Sunday Morning viewers that he was troubled by voter ID laws and suggested that a revived and improved Voting Rights Act would be a much better solution. In the instance of Wisconsin’s voter ID law, the U.S. Supreme Court didn’t agree with the president. Although the Wisconsin statute was blocked just before the midterm elections last fall, the Court declined to hear a challenge to it, making it operational in all future elections. However, the SCOTUS action is too late to be operational for Wisconsin’s upcoming spring elections.

The court’s action didn’t go down well with advocates.

“The values enshrined in our Constitution, and protected in the Voting Rights Act, are undermined when burdensome laws like photo ID requirements make the ballot box inaccessible to any eligible voters,” Penda Hair, the co-director of the Advancement Project, said in a prepared statement. “Our elections should always be free, fair and accessible to all citizens. Under Wisconsin’s restrictive photo ID law, they simply are not.” Andrea Kaminski, the executive director of the League of Women Voters of Wisconsin, added, “The problem with our elections is that not enough people vote in them. The last thing we need is laws that erect barriers for people who have been good voters for decades.”

Wisconsin’s governor had a different reaction. “This is great news for Wisconsin voters,” Governor Scott Walker said in a statement. “As we’ve said, this is a common sense reform that protects the integrity of our voting process, making it easy to vote and hard to cheat.”

In the Washington Post, Paul Waldman, a writer for the American Prospect, suggested that the Wisconsin Voter ID law decision means that “It may be time for liberals to admit that, barring a significant change in the makeup of the Supreme Court, this just isn’t a battle they’re ever going to win.” The liberals’ strategy has been to highlight the all-but-transparent motivation of Republicans to suppress the minority vote and to show that the problem of in-person voter fraud that Voter ID laws are supposed to correct is so rare as to be virtually nonexistent.

Waldman’s alternative is a dual path: On voter ID laws, pursue legislative and judicial remedies to ensure that voter ID laws are less onerous; on voting itself, pursue laws that make voting registration and turnout easier, like the bill that was passed in Oregon to automatically register everyone who gets a driver’s license or some other form of state ID card. In other words, focus on voting.

This strategy might be at the root of State Representative Larry Hall’s two pending bills in the North Carolina legislature, one to restore early voting days that were cut by the legislature, the other to allow college students to present college IDs to comply with the voter ID mandate. One can connect the latter bill to litigation filed by the Nashville Student Organizing Committee and nine students from Fisk and Tennessee State, both historically black colleges and universities (HBCUs). The students were prevented from voting in 2014 because the only IDs they presented to vote were their college IDs.

Sadly, as the Journal Sentinel article suggests, the antagonism of some legislators to people of color seems to be all-too-prevalent among some of the proponents of Voter ID laws. The Voter ID legislation pending in Nevada has been justified by one of its sponsors, Assemblywoman Jill Dickman, a Republican, with the statement, “Until Mickey Mouse and Donald Duck and dead people stop voting, I think we need it.” However, her other colleagues might have concerns beyond Disney characters. Assemblywoman Michele Fiore displayed some retrograde terminology toward blacks as she defended the Voter ID bill: “I can tell you the great respect I have for my peer, Mr. Munford, for being the first colored man to graduate from his college,” Fiore said to Assemblyman Harvey Munford, who happens to be black. “We’re in 2015 and we have a black president, in case anyone didn’t notice. So the color and the race issue; I think it’s time that we put that to rest?”

While Munford was gracious in his tolerance of Fiore’s terminology, her overall sentiment that racism is now an historical relic was a little jarring. Moreover, Fiore or no, the issue around Voter ID laws is their potential for significantly disparate racial impacts regardless of the overt, covert, or implicit racism of some of the sponsors of such legislation.

Waldman raises an important point about the decreasing likelihood of future SCOTUS decisions overturning these statutes. Should that be the case, nonprofit advocates will have to adjust their strategies to focus on both maximizing opportunities for the automatic registration of citizens as voters and minimizing the barriers to registration contained in Voter ID laws.—Rick Cohen