Egypt’s Answer to Jon Stewart out on Bail after Questioning 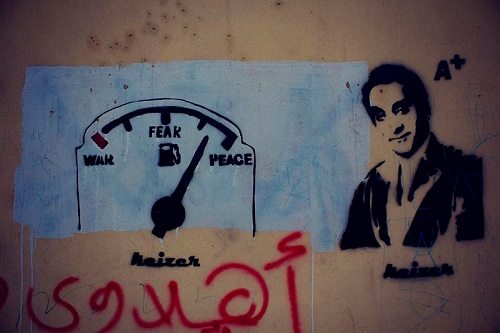 Egypt’s prosecutor-general recently issued an arrest warrant for television satirist Bassem Youssef and the satirist turned himself in this past weekend, only to be released on bail. The famous satirist’s crime? According to Ahram Online, “insulting President Mohamed Morsi, denigrating Islam and spreading false news with the aim of disrupting public order.” As regular readers of Nonprofit Quarterly know, we have a soft spot for political satire, as evidenced by the presence of Phil Anthrop as a regular contributor to our quarterly print magazine. Youssef’s “B plus” show originated as a YouTube program, but his low-budget operation grew in size and professionalism when his show was picked up by a television network after the fall of former President Hosni Mubarak.

Think of Youssef at bit like Jon Stewart or Stephen Colbert. His new show, “Al Bernameg” or “El Bernameg” (“The Program”), was a mock newscast, which was new for Egyptian television. As Youssef himself noted, “The challenge was to find writers to work in this type of satire, as it is new to the Egyptian media. Most of them are only familiar with the regular serious talk shows and comedy shows. But El-Bernameg, a black comedy analytical show, is totally new to Egypt.”

Will anyone speak out against the increasingly repressive Morsi regime of Muslim Brotherhood Islamists to defend Egypt’s Stephen Colbert? The Egyptian National Association for Change, the opposition group co-founded by Mohamed ElBaradei, the former director general of the International Atomic Energy Agency operating under the auspices of the United Nations, denounced the arrest through a spokesman who said, “The right to criticise public figures and senior officials is a legitimate right; there is no one who is above criticism.” ElBaradei himself tweeted, “Pathetic efforts to smother dissent and intimidate media is a sign of a shaky regime and a bunker mentality.”

It is ironic that the prosecutor-general, Talaat Abdallah, is trying to shut down Youssef as illegal, since his appointment by President Morsi was determined in the courts to be illegal. Abdallah hasn’t stepped down and instead ordered Youssef’s arrest.

We recently stumbled across a satirical column – not by Youssef but by an author who goes by the handle “Karl reMarks” – about the Morsi government’s plan to “end humour” by 2018. The column would have struck us as fit for the Onion were it not for Youssef’s arrest this past weekend (Karl reMarks had earlier written a column titled “The Onion to Sue Lebanon for Making Its Headlines Look Reasonable”).

In countries where repressive governments are in power, satire occurs at the risk of one’s freedom. Ask the women in Russia who were imprisoned for performing as part of the punk band Pussy Riot. Or ask Youssef, a trained surgeon who tended to wounded activists during the Tahrir Square protests. He’s not just a celebrity, but part of a social movement. Nonprofits dedicated to core principles of democracy and freedom of expression, in the U.S. or elsewhere, should be standing up for Youssef and, in this instance, against Morsi. —Rick Cohen