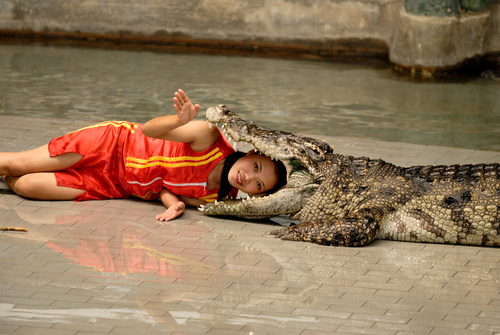 I was intrigued by the opportunity to write about the topic of “risk” in the nonprofit sector. After some 20 years in the sector as a lead staff member at LiveWorkPlay, as a volunteer with other nonprofit organizations on the ground or around the board table, and perhaps most importantly, thanks to countless formal and informal conversations with peers and community members, I believe the importance of risk-taking in nonprofit organizations is being critically undervalued.

Based in Ottawa, LiveWorkPlay helps the community welcome people with intellectual disabilities to live, work, and play as valued citizens. I’ve been a part of leading several significant shifts at our agency, the two most significant of those being the vast expansion of our volunteer network (and volunteer responsibilities) and the elimination of our day program in favor of a community-based approach to supporting the inclusion of people with intellectual disabilities. These are both shifts with outcomes that organization insiders and engaged members of the broader Ottawa community would see as having had hugely successful outcomes.

Of course, taking risks and making successful shifts is at once an exciting and humbling experience—exciting because it can be scary and humbling because, in essence, it means we weren’t doing our best prior to the change. In our case, that meant we were underutilizing our volunteers by failing to invite them to do more, and were limiting quality of life for the individuals we were serving with our focus on the day program as an outcome in and of itself.

We were engaged in “program thinking” versus “social change thinking.” In the broad field that is “human services,” we often forget that “life is not a program.” I’m not sure who said that first, but we say it a lot at LiveWorkPlay. It really annoys sector peers who find comfort in a programmatic view of service delivery, which is always a great indication that we are on to something.

This is not to say that great programs aren’t worthy of a defense, but rather that the existence of a program (no matter how long it has been around) does not in and of itself justify continuation or even the necessity of said program. But how often do you hear a nonprofit organization announce that one of their programs has become irrelevant or misdirected, and to heck with the financial consequences of going in another direction? If we don’t hear about it, is it because the need for change doesn’t exist—or is it because there are too many incentives to maintain the status quo and too many disincentives to take the risk?

In Ottawa, I witnessed this sort of scenario play out publicly with our local United Way and some of the agencies that have benefited most from United Way Ottawa donors over the past several decades. Responding to compelling internal data as well as to clear sector trends, the local United Way made the decision to transition away from being primarily a major funder of program budgets for a small number of agencies. They decided to instead pursue working with a broader representation of community agencies as partners. In other words, they shifted from a programmatic perspective to pursuing a social change agenda (with targets for addressing specific community problems such as reducing unemployment for people with disabilities rather than funding a broad range of disconnected disability programs). Perhaps not surprisingly, this change was not well received by those with impacted budgets. In the resulting (and harmful) public debate that played out in the local media, the desire to shift to a social change approach was pilloried as an attack against those programs that would no longer be automatically funded.

The critical context of there being more than 3,000 registered charities in the Ottawa community with tens of thousands of programs was largely ignored. To me, the really important story was that a very old approach (and more importantly, an approach with a limited impact that was difficult to measure) to utilizing donor dollars for the betterment of the community was undergoing a significant and important reform. But in speaking publicly about this perspective, this view seemed largely baffling to our local media, who were clearly infatuated with a dialogue about “cuts.” Notwithstanding the many lessons to be learned about communicating and managing change, to me, the more important lesson here is that our sector is a long way from the type of leadership that is “disruptive innovation.”

The concept of disruptive innovation is commonly associated with Clayton Christiansen, who routinely dispenses logical statements like this one: “Over time, we’ll need fewer and fewer hospitals. Boards of those institutions need to just remember that the scope of what they need to do is to be responsible for the health of people, not the preservation of the institutions.”

Radical stuff? It all depends on whether one is primarily pursuing social change or primarily seeking to grow one’s programs. I spoke publicly of the “de-programming” movement earlier this year, but (for now) this movement seems to be happening rather quietly. On the other hand, opposition to change and aversion to risk-taking frequently happens loudly and publicly, often with the willing assistance of media outlets that continue to report on the sector from a programmatic perspective rather than focusing on the work of solving problems through permanent alterations of the social fabric.

Leadership in the nonprofit sector should be understood and celebrated for its risk-taking and anticipation of critical trends, not merely for affiliation with a particular cause or set of programs. A car that has four wheels is not cause for celebration, but a car that reduces fuel consumption by 40 percent is something to get excited about. Likewise, we should not get excited about a program that serves 100, 1,000, or 10,000 people; we should be celebrating an increase in employment, a decrease in homelessness, or prevention and reduction of disease—real changes that we can measure in the lives of individuals and that forever change our communities.

Financial and resource scarcity in the nonprofit sector is real, and we need to encourage risk-taking to find our way through. For even the largest of charitable organizations, financial pressures are threatening the status quo and motivating a response. Change is coming. Some organizations will invest in fighting it. Some will invest in leading it.

Keenan Wellar is the co-founder and co-leader of the Ottawa-based charitable organization LiveWorkPlay, which supports the community to welcome people with intellectual disabilities as valued members of the community. He founded the organization with his wife, Julie Kingstone, in 1995.