Eminent Domain for Mortgages: More Questions on a New Player 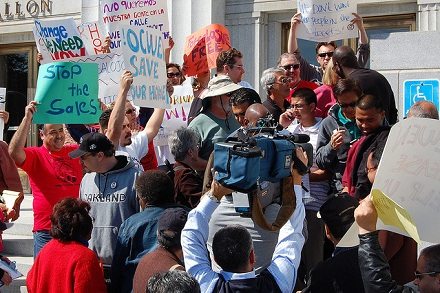 On July 17th, NPQ ran a newswire discussing the possible motivations of one of California’s proponents for the use of eminent domain to take over and restructure mortgages. We included in that newswire a relatively damning analysis from economist Robert Kuttner of the plan put forward by progressive philanthropist Steve Gluckstern. Kuttner does not disagree with the use of eminent domain in mortgage restructuring, but strongly believes that no private business interests should enter into the mix.

Now the proposal has surfaced in Berkeley as put forward by Michael Sauvante, who, beginning in the 90s, founded a number of tech companies, including something then called the Rolltronics Foundation. The Rolltronics Foundation is now called the National Commonwealth Group, the group through which Sauvante is pursuing the plan to avoid foreclosures through the use of eminent domain. Federal Judge J. Craig Whitley, who heard a bankruptcy case in 2007 related to Sauvante’s companies, declared that they were created expressly to defraud investors, but Sauvante claims that his investors did not agree with the ruling.

In any case, the Berkeley City Council and the Oakland City Council are reportedly moving ahead with an exploration of the use of eminent domain with or without any tie to Sauvante. Sauvante has enjoyed some support from some portion of the Occupy network, making a presentation at the end of July by conference call. Sauvante says, “With Facebook and the other social networking sites, we could potentially get a viral dissemination of it, both inside and outside the Occupy movement,” Sauvante said. “That will just create that much more motivation on local governments to break free from the Wall Street banks.”

NPQ would love to hear from its readers who are involved with one of these eminent domain mortgage restructuring efforts in California or elsewhere. What matters in the structure and makeup of the program, in your opinion? We have seen the use of eminent domain work well in Boston with the Dudley Street Neighborhood Initiative but that was, presumably, a slightly different kettle of fish in that a collective community decisionmaking process was already in place. –Ruth McCambridge