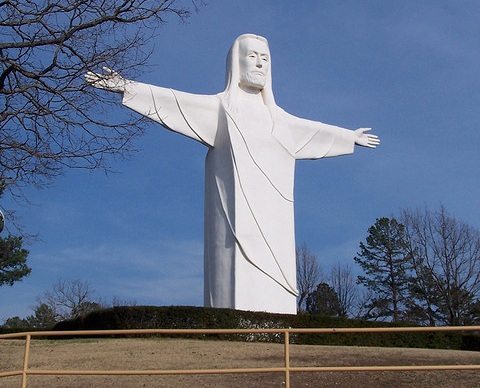 In Eureka Springs, Ark., the Great Passion Play, which portrays the last few days of Jesus Christ’s mortal life on earth, has agreed to an “amicable foreclosure” with its bank, bringing this Ozarks institution into at least a state of suspension if not full closure. This poses a problem for the local economy because the play employed more than 200 people full time and also attracted tourists to the area who bought at local businesses to the tune of approximately $7 million to $9 million annually. “They have reached the end of the road and are turning everything over to us,” commented Cornerstone Bank President and CEO Charles T. Cross.

Sponsored by the Elna Smith Foundation and in operation since July 1968, the play boasts a cast of more than 150 area residents. However, the play has seen its attendance drop precipitously over the past four years, from 3,000 a night to a high of 1,000 this past year. Various reports attribute the drop off to the economy and/or the dismissal of the group’s advertising firm. A recent appeal for donations did not garner enough to keep it above water. This video was a part of that campaign:

Anonymous sources told the Lovely County Citizen that the GPP owes approximately $1.2 million and is unable to meet its mortgage obligations. It also owes $35,634.34 in taxes and other fees on its properties. It appears that the bank prefers to find a buyer for the property who will re-open the play, but failing that, they hope to find a purchaser who would use the property in another way that would be a tourist draw for the area.

“Our goal at the bank is hopefully to find someone who can inject capital into it and continue to perpetuate the business in a way that would be helpful to the town,” Cross said. “We’re hoping we can find someone to sell it to who can enhance it and do those things to keep people employed and keep drawing visitors to Eureka Springs.”

It is not only the land being sold. Sources say that the GPP is selling its stock of live animals, which have been part of the performances, because it can no longer afford to feed them. But the most visible evidence of the group’s troubles is perhaps the fact that the lights have been turned off on the iconic Christ of the Ozarks, the second largest Christ statue in the world. The statue on top of Magnetic Mountain is 65.5 feet tall and founder Gerald Smith wanted it to be accessible and visible 24 hours a day.

Cornerstone Bank Board of Directors Chairman John F. Cross suggests that the best outcome might be in finding a buyer both for the Great Passion Play and also for the Eureka Springs & North Arkansas Railway, which sits at the base of Magnetic Mountain and is also for sale: “It is just downhill from the play and connections could be easily made for visitors to be bussed up the hill to attend,” he said. “It would open up a lot of parking and allow many more visitors to easily access the play.”

This story is significant for many reasons. A host of stories earlier this year emphasized the contributions art organizations made to local economies. This is a clear example of the role that they can play in attracting commerce. –Ruth McCambridge