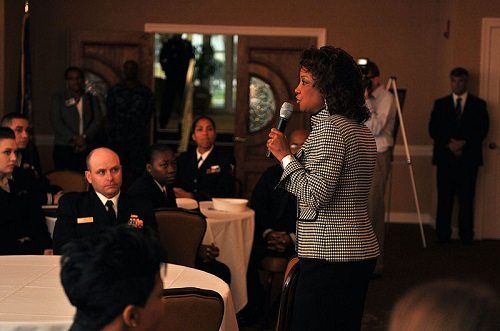 State investigators interviewed Florida Lt. Gov. Jennifer Carroll on Tuesday about her connections to a charity called Allied Veterans of the World (incorporated as a 501(c)(19)). She promptly tendered her two-line resignation to Gov. Rick Scott on Wednesday, without any public information so far about whether she is being charged with any of the allegations floating about Allied Veterans, whose Internet cafes around the state (called “fundraising centers”) were allegedly the apparatus of an illegal $300 million gambling ring. While Carroll was being interviewed by state officials, federal law enforcement personnel arrested 57 Allied Veterans officials and employees and charged them with criminal racketeering. As the NPQ Newswire has previously noted, Allied Veterans has dozens of Internet centers throughout Florida. It also has operations in five other states, which may be the reason that the feds are also involved.

What was Carroll’s connection, given that she hasn’t actually been charged or arrested? The governor and Florida Attorney General Pam Bondi didn’t identify what had prompted the quickie resignation, though Gov. Scott complimented Carroll, the state’s first black lieutenant governor, for doing the right thing for that state and her family by resigning. Prior to her election, Carroll’s Jacksonville-based public relations firm had done work for Allied Veterans and Carroll herself appeared in a television commercial for the charity—while she served in the Florida House of Representatives. However, the affidavit accompanying the federal arrests indicated that the charity ran Internet casinos with slot machines at the “fundraising centers,” grossing $290 million between 2007 and 2012 but distributing only $6 million to charity.

The Sentinel reports that Allied somehow also distributed $490,000 in campaign contributions since 2009, the bulk to the Republican Party of Florida, prompting Scott to order his campaign apparatus to re-donate any contributions from Allied Veterans to charity. However, Florida Senate President Don Gaetz, who had refused campaign money from Allied Veterans all along, said that there may have been more than 40 subsidiary arms of the organization and he has ordered a “top to bottom review” of his campaign finances to see if any of the subsidiaries donated to him. The Sentinel reports that Allied’s “parent company” (it’s unclear how this LLC could be the parent of Allied Veterans, though it apparently provided the technology and such), an Oklahoma-based entity called International Internet Technologies, had paid lobbyists over $1 million in 2012 to lobby—successfully—against legislation that would have stopped “sweepstakes” cafes which are all but gambling centers. On Wednesday, the lobbying firm working for the Oklahoma firm resigned.

We aren’t surprised about the charges against Allied Veterans, as we wrote in 2011. However, we continue to be shocked at the abuse of veterans as fronts for charity scams around the nation. Remember the December 2007 hearings of the House Committee on Oversight and Government Reform on “assessing veterans charities?” Is it time for another congressional investigation to clear out more abusers so that the important work of legitimate veterans’ charities can proceed unfettered? —Rick Cohen