Food Bank Etiquette, or How Not to Be a Bleep at the Food Bank 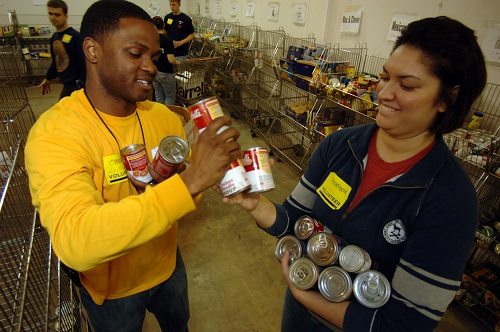 This post by Deb Martinson, a woman who says she was formerly homeless and has had to make use of more than one food bank in the past, is a nice reminder of the Golden Rule as applied to basic needs charity. I like thinking in these terms. Would you want an imperious lecture with your disaster aid, as is described here to have recently happened in the Philippines? And, as she writes, “If you’d be thrilled by the prospect of having that dented can of split pea soup for breakfast, donate it. I’m guessing, though, that there’s a reason it’s been hanging out in your pantry for the last three years.”

Do not give anything you would not want to eat. Odds are that no one else wants to eat it, either. Grocery stores donate enough dented cans and torn cardboard boxes to cover the “food in scary-looking packages” base. If you wouldn’t pick it up off the supermarket shelf, don’t put it in the bin.

Don’t give stupid things. I once received an immense tub of candied fruitcake fruit from a food bank. When I eventually ran out of everything else and ended up eating some of it, I thought, “I am so poor, I’ve been reduced to eating other people’s rejects.” Some food is just too horrible to wish on anyone else; throw it out instead.

Consider giving food that can be eaten without cooking. When I was homeless, I didn’t carry my microwave around. Even living indoors, people have a hard time cooking if their landlord won’t fix the broken stove or the power company just shut off the electricity again. That’s why some agencies specifically offer no-cook food bags. Think granola bars, crackers (including cheese and cracker packages), spam, tuna, peanut butter, dry milk—anything you’d take on a long hike.

Don’t give perishable items. This is kind of obvious, but I’ve seen bread in a donation bin before. Many food pantries get day-old bakery items and imperfect produce from local merchants, and any perishable items you donate will probably be thrown out. Also, leave food in the original packaging. If it needs to be portioned out, volunteers at the food bank will take care of it.

Think about people with special dietary needs. It can be difficult for people with food allergies or celiac disease to find donated food they can eat. If you donate gluten-free food, wrap some masking tape around the package and use a marker to write “GLUTEN-FREE” in large print. Do the same for allergen-free items. Clear labeling will help food bank workers get the right food to the right clients. Make sure the food really is what your label says; if you have any doubt, skip it.

Make it easy to get at. Aseptic packaging and pouches are better than pull-top cans are better than traditional cans. It sucks even more than usual to be hungry if you’ve got a perfectly good can of food and no way at all to get the damned thing open. This is especially true for no-cook items; people who need these bags may not have can openers. Avoid glass jars, as they may break during processing.

Choose things that don’t require elaborate preparation. A boxed cake that says “just add water” is much better than one that wants milk, eggs, vegetable oil, and whatever else it can think of. Instant coffee is great; ground coffee doesn’t work for some people. Also good are multitaskers. Bisquick rocks.

Keep it simple. I got canned escargot once, which went right into the garbage. There’s probably someone out there who’d love to see a can of snails in their bag, but most people will react the way I did. Exotic foods are likely to be tossed and they take up space that could go to things people will actually eat.

Ask what’s needed. The volunteers at the food bank know what’s on the shelves and how far it will go. They may also want donations of non-food items, like soap, toilet paper, tampons/pads, diapers, and pet food because these can’t be purchased with food stamps. I never would have guessed that the food bank near my house needs plastic bags—clients are supposed to bring their own, but bags wear out and some people just don’t have one. Your local food bank probably needs things you’d never think to give them. Ask.

Check your grocery store. Many work with local food pantries to assemble bags of food you can buy and donate for 5 or 10 bucks. It’s a really easy way to give.

Be nice. Most of what food banks ask for is pretty basic, but I still remember how finding cookies in my bag could make me happy all day. When you’re too poor to feed yourself, small things take on more significance. Try to include at least one item you’d choose as a treat for your kids. Someone else’s kids will love you.

Consider donating cash. Large organizations can get way better deals on food than you can; with ten dollars, Feeding America can provide 90 meals to hungry people. You can give them money here.

We also liked some of the comments, like this one from Celia: “While someone may be interested in eating the bag of organic amaranth I bought on a whim and has been giving me side eye for six months, it is probably better to donate a bag of rice.”

And if you liked this, you may also like “Three Ways to Avoid Being a Holiday Charity Nuisance”—Ruth McCambridge