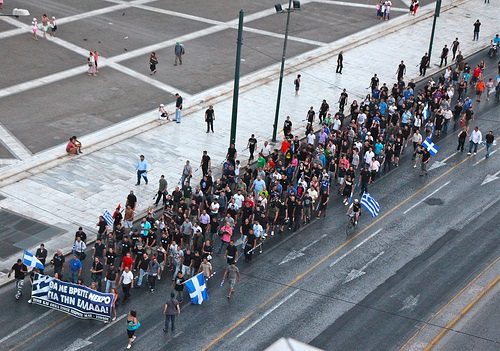 Out-and-out bigotry is seldom connected with nonprofits and charity. That said, racism, and its more easily concealed counterpart, diehard opposition to immigration and immigrants, is hard to excise from the “voluntary sector.” No, we don’t equate different opinions on immigration reform with racism, but worldwide, there are some virulently racist—and some less obviously racist—groups picking up a popular cudgel to batter immigrant populations.

Giorgos Kaminis, the mayor of Athens, Greece, is trying to cancel the third annual Greeks-only charitable food giveaway sponsored by the Golden Dawn political party. In the troubled Greek state, still reeling from economic problems and imposed austerity government budgets, these food programs have become popular, but because the events exclude immigrants, Kaminis has issued a ban preventing these “soup kitchen[s] of hate.” The Golden Dawn plans to proceed, ostensibly in celebration of the Greek Orthodox Easter.

In England and Wales, the anti-immigrant U.K. Independence Party recently shocked political commentators by taking 26 percent of the vote for Parliamentary seats in which it ran candidates. The head of the UKIP, Nigel Farage, is a media-savvy character, and a far cry from the stereotypical knuckle-dragging troglodyte, but only last year, Farage made his position very clear during one of his campaign rallies with his top of the lungs statement that “charity begins at home.” The implications are unmistakable: the UKIP might not be quite as far to the right as Golden Dawn, which the AP suggested has had neo-Nazi trappings in the past, but it is unsympathetic to the UK’s membership in the European Union from where many immigrants come to the British isles.

Neither Golden Dawn nor UKIP are traditional charities. They are political parties making statements about who should and shouldn’t benefit from charity based on race or national origin—and their concepts of “charity” clearly extend to governmental programs. Nonetheless, readers probably know of U.S. charities that have, to put it mildly, entertained and promoted racially unattractive positions regarding who should and shouldn’t benefit from their charitable activities, or even worse, deprived people of certain races and national origins of specific rights or benefits. One can easily understand Mayor Kaminis’ distaste for the discriminatory soup kitchen of Golden Dawn. But would the horribly awful political and charitable position of the organization justify the government shutting down its soup-kitchen-of-hate, or drumming it out of the charitable sector itself?—Rick Cohen