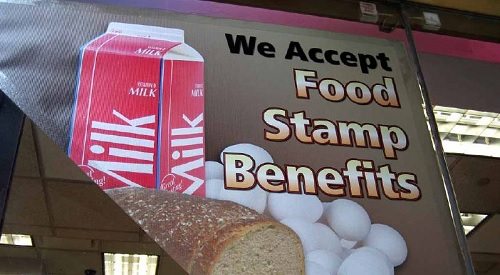 The wise men and women of the U.S. Congress return to Washington this week to take up the important issues of the day. For some legislators, it means launching another attack on food stamps by Republicans who are, according to the New York Times, “pushing to revamp and scale down the program.”

It is particularly ironic that food stamps are at risk while other farm-related subsidies get bipartisan support. The Times notes Republican congressman Stephen Fincher, owner of a farm north of Memphis, who himself has received $3.5 million in federal government farm subsidies between 1999 and 2012. The Tea Party Republican voted for the recent farm bill that passed Congress—but without provisions for food stamps. His explanation last May for his vote in favor of subsidies for farmers like himself but against food stamps was biblical. “The role of citizens, of Christianity, of humanity, is to take care of each other, not for Washington to steal from those in the country and give to others in the country,” Fincher said at the time. In response to a Democratic critic, he added, “The one who is unwilling to work shall not eat.”

Rep. Fincher seems to have missed the point that the typical food stamp recipient may actually be a member of the rapidly expanding numbers of the working poor. For example, in Florida, as of October 2012, 1.9 million households received food stamps; about 500,000 of them had earned income, and of that number, 9,095 received paychecks from their jobs at Walmart stores. For low-wage employers like Walmart, perversely, the government’s provision of food stamps for their employees subsidizes the corporation’s ability to maintain its less-than-living-wage pay levels. Contrary to Fincher’s assertion, these people work, but they still can’t feed themselves, in addition to paying for rent, medical, and other expenses, without access to food stamps.

The increase in numbers of the working poor doesn’t seem to faze the critics of food stamps. At the Heritage Foundation, Robert Rector is calling for new standards for the $80 billion food stamp program, including tying food stamp benefits to work and advocating mandatory drug testing for recipients. Republicans in the House of Representatives favor cutting $40 billion from food stamps in the next 10 years, which the Center for Budget and Policy Priorities says would cut four to six million people from the program.

With current reductions in food-stamp benefits, recipients say that food stamp subsidies already last only around two weeks. With the next wave of benefit reductions in November tied to the expiration of a stimulus-related increase enacted in 2009, two weeks of subsidy might be a pleasant memory of better times.

Implicitly, the critics are suggesting that food stamps are a wasteful public program, but that’s not what a recent audit report by the U.S. Department of Agriculture Inspector General found. Crop subsidy programs, such as those available to Rep. Fincher, had misspent through high-dollar overpayments $14.6 million in 2012; farm development programs had misspent another $2.7 million. But the Supplemental Nutrition Assistance Program (the formal name for food stamps) and four other programs aimed at alleviating hunger for the domestic poor had not overspent a penny in high-dollar overpayments. That isn’t stopping Republicans from finding the occasional abuser, like the longhaired California surfer who Fox News highlighted as a food-stamp abuser, to demonize food stamp recipients and justify the proposed $40 billion in cuts.

Typically, during times of high unemployment, federal work rules for food-stamp recipients (requiring able-bodied recipients without dependent children to work at least 20 hours a week) are waived, but Kansas, under Governor Sam Brownback, is going to reinstate those requirements, which will knock as many as 20,000 unemployed people in the state off the rolls. In Ohio, Governor John Kasich is following Brownback’s lead in reinstating the work rules for food-stamp recipients, except for residents in 16 high unemployment counties. Some 134,000 of Ohio’s $1.8 million food stamp recipients could be affected by the new work rule reinstatement. It is a rare state like California that is going in a different direction; Governor Jerry Brown is about to sign SB672, the Anti-Hunger Act, which aims to reduce the bureaucratic hurdles in applying for food stamps that keep half of eligible Californians from receiving these benefits.

Instead of making big pronouncements about who deserves or doesn’t deserve food stamps, perhaps members of Congress might do better to ask nonprofit food bank operators about what they’re seeing. They could ask Marlin Martin, the food program director at Clatsop Community Action in Oregon, why he sees his program’s role as “putting our fingers in the dike…but we’re running out of fingers.” They might ask the operators of the Yuma Community Food Bank why, on May 15th of this year, they served 480 families, the highest number in the history of the organization—and, despite a special appeal for new food donations, are running out of supplies again. They might ask James Gill, the director of the Sumner County Food Bank in Tennessee, why the food bank that helped 49 new families in August who had never come to a food bank before had to turn away 31 families due to lack of food supplies. The answers are there. Rep. Fincher might be well advised to ask the people who really know.—Rick Cohen