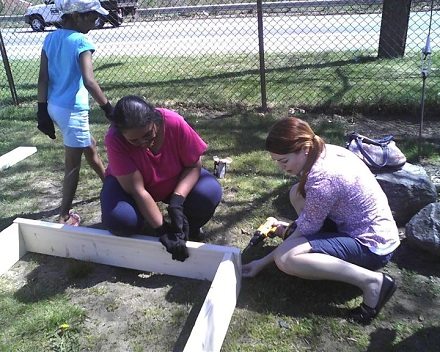 Image: Social Capital Inc building a community garden for the YOU Generate Campaign

As you may know, it’s National Volunteer Week. So here in NPQ’s backyard, the Massachusetts Service Alliance (MSA) has launched a new campaign to increase volunteerism across the state. The YOU Generate Campaign aims to generate awareness of how volunteerism can help resolve critical problems within communities. MSA is a nonprofit that provides support for community service learning and volunteerism, and also administers the state’s AmeriCorps and Commonwealth Corps programs.

For the campaign kickoff, MSA is working with partner organizations across the state to host a variety of volunteer events. These events vary from environmental service projects to producing over 10,000 meals for the critically ill with Volunteer Kitchen in Boston. Connector agencies involved in the initiative are Boston Cares, the University of Massachusetts-Boston, the Massachusetts Audubon Society, Cape Cod Volunteers, United Way of Central Massachusetts, and many more. Nonprofits can also acquire volunteers through Connect & Serve, a volunteer portal administered by MSA. For those Bay State residents interested in giving back, Connect & Serve provides a volunteer opportunities map covering each region of the state.

MSA has also worked a social media campaign into the YOU Generate initiative (using Twitter hashtags #YOUGenerate and #MassVolunteers) to raise awareness and encourage others to get involved with volunteer opportunities in the state. A new MSA blog has also been introduced, featuring guest writers blogging about their experiences with volunteerism. The YOU Generate campaign also gives nonprofit organizations the opportunity to recruit, retain and manage the new volunteers who participate in service activities this week. The campaign will continue past Volunteer Week to support connector agencies that are working to link volunteers to organizations that could use them in their communities.