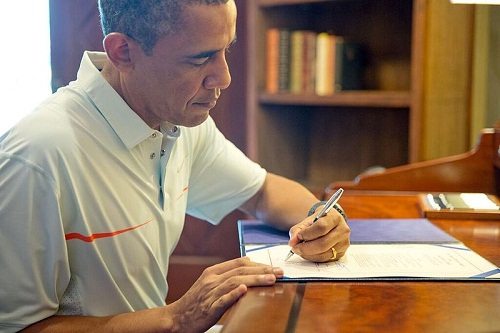 Thumbs Up: President Obama has laid down an important marker on behalf of the Legal Services Corporation. It appears that he has proposed to increase the budget of the Legal Services Corporation from an estimated $365 million in FY 2014 to $430 million in FY 2015, an increase of 17.8 percent. Included in the budget is an almost doubling of LSC’s pro bono innovation fund to $4.9 million. The significance of LSC is huge in the lives of low-income families in need of civil legal assistance. Even with the constraints that have been piled on LSC over the years regarding the categories of people it is prohibited from serving and restrictions on its abilities to file class action suits or to sue other federal agencies, it is a benchmark of this nation’s commitment to protect the interests of poor people in the courts, where they are almost always otherwise outgunned and outmaneuvered.

It is sort of a positive that the president proposed $20 million for the HUD-supported Section 4 capacity building program that helps strengthen community development corporations and community housing development organizations through three national intermediaries—the Local Initiatives Support Corporation*, Enterprise Community Partners*, and Habitat for Humanity. More appropriate would be $35 to $40 million, as it was only a few years ago, given the important role of nonprofit CDCs in producing affordable housing. Congratulations to the lobbyists that convinced the Obama White House to include money for Section 4, but it should be doubled, which would lead to much more than a doubling of CDC output.

Many neighborhood-based nonprofit developers have been participating in the HUD Neighborhood Stabilization Program, meant to rehab and restore foreclosed properties to the market. Although the latest and last round of NSP is likely to be fully spent out by this month, the President suggested another $15 billion for NSP program activities. The new NSP program would be called Project Rebuild, which seems to be pretty much the same as NSP 1, 2, and 3, except perhaps a greater ability for grantees to take on commercial properties.

New Federal Foundations: It might have escaped attention, but the budget calls for $3 million to be devoted to a U.S. Citizenship Foundation, part of a $10 million effort to help develop innovative techniques to improve citizenship education and naturalization preparation. First proposed as a provision in 2013 border security and immigration modernization legislation in the Senate—that is, the Senate’s version of comprehensive immigration reform legislation—the foundation would be able to accept private donations toward helping the federal government support other nonprofits engaged in providing immigrant integration assistance.

The notion of nonprofit or foundation entities created by the federal government to solicit donations is not new, having been done with FEMA, NASA, the Centers for Disease Control, and other federal agencies. A second new public foundation to be created in President Obama’s FY 2015 budget is the National BLM Foundation, giving the Bureau of Land Management the ability to “leverage private funding” (the budget euphemism for “solicit private donations”) to protect natural, cultural, and recreational resources on public lands. Already performing a similar function is the National Fish and Wildlife Foundation, which in FY 2012 received $42.6 million in federal funds to “leverage” $149.5 million in private donations and grantees’ matching funds to provide support to 505 projects. The 501(c)(3) NFWF, created in 1984, had working relationships ongoing with 50 corporate and foundation funders.

Mixed Signals: The administration apparently feels that its support of the Global Agriculture and Food Security Program is no longer necessary. The GAFSP is a program administered by the World Bank to support agricultural investment plans of poor countries. GAFSP grants were funded by a combination of public funds and private dollars, including grants from the Bill & Melinda Gates Foundation. In 2012, the U.S. pledged $1 for every $2 from other donors to the Program toward generating a strong capital base for the program. Since then, according to the Obama administration, the program has the ability to raise $720 million from other donors, leaving the U.S. government to declare “time’s up” for U.S. government contributions. Will the other private donors ante up? This is the dilemma of development aid in poor countries: what happens when the big donor decides it is time to move on?

A mixed picture exists in President Obama’s budget proposals for housing counseling. The budget calls for an increase in HUD housing counseling funds from $45 million to $60 million, an increase of one-third. However, the housing counseling to be delivered by nonprofit intermediaries and governments is basically pre-purchase and post-purchase counseling for homebuyers. On the other hand, the housing foreclosure counseling to be made available through the Neighborhood Reinvestment Corporation, popularly known as NeighborWorks, has been proposed for a cut from an estimated $67.5 million in FY2014 to $50 million in FY 2015. The budget even cuts NeighborWorks training for foreclosure counseling from $3 million to $2.5 million.

What is a federal budget but a collection of signposts telling the reader what the president values or doesn’t? Policy archeologists looking at patterns to see the priorities of the administration (and perhaps the nation) may not find a budget bill emerging from Congress this year that reflects the exact proposals offered by President Obama. But they will find—hopefully—issues laid out and highlighted by the president, made serious by his proposed allocations of millions and billions of dollars. What the president flagged with his proposals should be the discussion points going forward on the budget—even if the final budget isn’t precisely his budget.—Rick Cohen