Foundations, Pensions, and the Detroit Institute of Art: Still a Complicated Picture 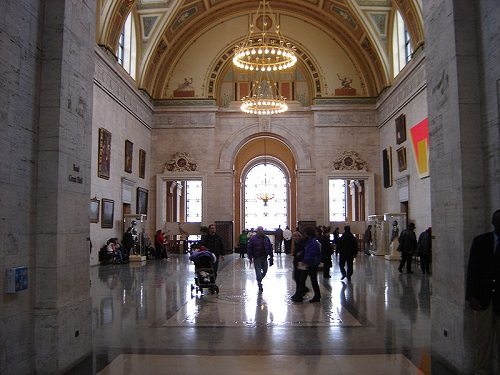 Overcoming all sorts of obstacles, including a recent challenge to the deal cut between foundations and the state to convert the Detroit Institute of Art into a nonprofit free from City ownership and control, the Retired Detroit Police and Fire Fighters Association has agreed to an arrangement in which their pensions would be protected from any cuts. That stands in contrast to the pensions for those Detroit retirees who did not work for the uniformed police and fire; their pensions will be cut 4.5 percent in the deal and will receive no annual cost-of-living adjustments, compared to a pledged 1 percent (down from 2.25 percent) annual adjustment for police and fire pensions. Essentially, all the police and fire retirees are accepting is a cut in their future COLA adjustments, which reports say could be adjusted upwards if the pension fund investments do better in the markets.

Part of the deal is that the pension boards have to accept the spinning off of the DIA, which would be helped by an $816 million fund capitalized by the state and by private foundations over twenty years. State legislators still have to act to authorize the state’s $350 million contribution to the “grand bargain.”

While pensioners come out better than expected in this deal, Detroit’s bondholders are not likely to be happy. The emerging deal treats pensioners better than bondholders. As a result, bond insurers like Syncora and Financial Guaranty Insurance Co. have been highly critical of the DIA “grand bargain,” suggesting that four investors had offered as much as $2 billion for portions of the DIA collection and assets. Syncora and FGIC were joined in that action by AFSCME Council 25, the public sector employee union that may have civilian pensioners in its ranks.

Nonetheless, this step with the uniformed pensioners reflects a quickening pace of negotiations and agreements that could help the city’s emergency fiscal manager, Kevyn Orr, reach his October deadline for the city to exit Chapter 9 bankruptcy. Most of the local press reporting has greeted the FGIC/Syncora/AFSCME argument with hostility, but the reality is that the grand bargain is still up in the air. The state hasn’t yet officially acted to approve its contribution. The DIA itself has to put in $100 million, and that’s not easily generated. Orr has implied that if the bondholders don’t agree to his proposed cuts in their returns, he could push them through in the form of a cramdown (a forced court-approved deal allowable if one class of creditors agrees to the deal they’re presented), but taking that action could jeopardize the grand bargain.

It would seem that the foundations involved in the DIA grand bargain are simply interested parties committed to saving the art from disposition on the market, but philanthropy overall isn’t so above the fray. Just recently, public employee unions raised vociferous objections to the millions of dollars of grants from the Laura and John Arnold Foundation for public pension research. The unions complain that the foundation’s research agenda is clear: to replace defined pension benefits with pensions that look more like 401(k)s or hybrids.

A former Enron trader, John Arnold has denounced the criticisms as an “organized smear campaign” against him and his foundation. The unions’ opposition to the Texas billionaire’s interest in pension reform may be partly due to his role as a visible and large campaign contributor to Barack Obama. National Public Pension Coalition executive director Jordan Marks describes Arnold as a “right-wing ideologue bent on gutting public pensions,” notwithstanding his generous contributions to Obama’s election campaigns. Is Arnold alone in philanthropy with concerns about the future of public sector pensions, or perhaps public sector unions themselves? We doubt it.

Foundations outside of Detroit will inevitably be facing pension contribution pressures in the wake of the precedent of the Detroit grand bargain. Just imagine the pressures from the $71 billion unfunded liability of the California state teacher retirement fund which some say will go bankrupt by 2043, the public pension funds in Memphis which have been annually been receiving 25 percent less than actuarial guidelines from the city government, or Chicago’s $19.5 billion in unfunded pension liabilities that Mayor Rahm Emanuel is hoping to partly address with a $250 million annual property tax increase. It is difficult to imagine that pensioners and creditors won’t be knocking on foundations’ doors, but perhaps without the mantle of saving the DIA as camouflage for getting money from foundation endowments into pension fund accounts.—Rick Cohen