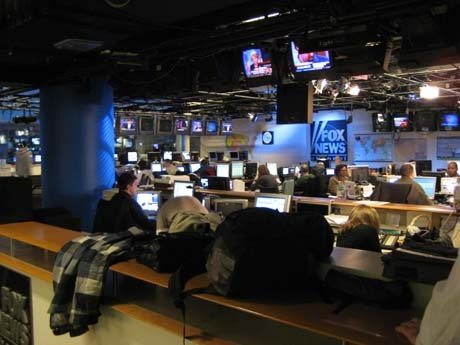 We do feel a tiny bit of sympathy for Fox News Channel anchor Anna Kooiman who reported on Fox & Friends that President Obama planned to use his own personal assets to pay for the operations of the International Museum of Muslim Cultures in Jackson, Mississippi, purportedly closed because of the government shutdown. Kooiman had been concerned about the unfairness in closing the World War II monument, but keeping the Muslim museum open.

Kooiman did have one part of the story right: there is an International Museum of Muslim Cultures in Jackson, operating on an annual budget of about $100,000 raised entirely from private contributions—no government money. Its co-founder, Okolo Rashid, was a little surprised to receive a bevy of calls about the Obama connection, until she figured out that Kooiman’s news report source had been a satirical article on the National Report news site, titled “Obama Uses Own Money to Open Muslim Museum Amid Government Shutdown.”

Kooiman apologized on Twitter, promising to do some research next time, but in her defense, the news lately could easily be confused for satire if it weren’t for the fact that it is actually happening. (Remember Sen. Ted Cruz’s 21-hour anti-health insurance speech, complete with a reading from Green Eggs and Ham?) Headlines on the National Report website do have that slight glimmer of truth that would make them almost believable at first glance: “NYC Mayor Bloomberg to Ban Buffets”; “Is Grant County, North Dakota Brewing a Race War? Black Panther Leader Purchases Land Adjacent to White Supremacist Town”; and “The New Bullies: Violent Gay Hate Groups—Media Blackout.”

It’s just as difficult sorting through the news at “America’s Finest News Source,” The Onion: offering speculation on the end to the government shutdown (the “American public takes to streets and overthrows existing government following two unbearable weeks without access to the National Gallery of Art”), an infographic on how the health exchanges will work (“Under the provisions of the Affordable Care Act, all plans are required to provide essential health benefits, which include any laboratory tests on knees, full outpatient knee care, and 24-hour knee monitoring”), and a story headlined “Last Thing Government Worker Needed Was Agency Labeling Him ‘Nonessential.’”

Well, we don’t have quite that much sympathy with the Fox News anchor. Not only didn’t she or her staff do sufficient fact checking or even cite the source they were using for the item, they obviously played into the right-wing meme of President Obama’s supposed Muslim inclinations, even though the man is an avowed Christian.

We love satire at NPQ, but please be careful about mistaking satire for real news. You too, Fox News.—Rick Cohen