Freddie Gray’s Death: Due to an Inadequate Supply of Charter Schools in Baltimore? Really? 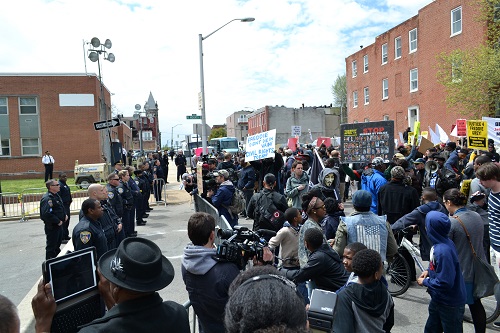 Do you think that the death of Freddie Gray in the back of a Baltimore police van means that the city should benefit from more charter schools? Writing for the Education Opportunity Network, Jeff Bryant doesn’t think so, either.

It is quite an intellectual leap to take an incident of chronic police abuse against black men or, more broadly, an incident reflecting this nation’s continuing problems of racial injustice, and suggest that a compelling solution should be the expansion of charter schools in Baltimore. As Bryant notes, this seems to be spin by somewhat overzealous charter school advocates, but the notion was picked up by the Washington Post, which concluded that Baltimore needs “a plan that welcomes high-quality charter organizations,” and the Wall Street Journal, which described charters as “an escape for poor children.” Both papers were critical of Maryland lawmakers, which the Post described as “so hostile to charter schools.”

To lift up police brutality issues in Baltimore—or Ferguson, Cleveland, and other communities—as a justification for charter school expansion does a disservice to charter schools, whatever their merits, and to the advocates who see the overaggressive policing toward young black men as a civil rights issue. Charter proponents could look at education issues in Baltimore and try to make a case for charters, though Baltimore’s public school problems seem to be in large measure due to inadequate and sometimes chaotic state and local funding, not because of a paucity of charters. That doesn’t mean that Baltimore’s school issues would be automatically solved by the magic of more money, but funding practices have made Baltimore schools a mess. Hopefully, Mayor Rawlings-Blake and Governor Hogan will find a way to cooperate on getting money flowing into the schools. However, charters don’t in any way fix the structural financial inequities of schools in places like Baltimore.

Would more charter schools lead to greater racial equity in Baltimore? The data on the racial impacts of charter schools are mixed, much like the data on other aspects of the roles of charters in public education. And some increasingly typical charter school practices, such as “zero tolerance” policies that often end up unnecessarily criminalizing student misbehavior along with ramping up suspensions and expulsions, actually add to the challenges facing young black men in urban localities like Baltimore.

Without a doubt, reducing racial inequities in schooling would be a positive step toward a healthier community context for young black men, but that’s hardly the only arena for addressing the problem of race. “In communities like Baltimore,” Bryant writes, “what’s more likely to advance real progress are new policies that take real steps to end racial discrimination in law enforcement, alleviate the chronic underfunding of high-poverty schools, promote racial integration in housing and education, and transform punitive education policies to practices that advance understanding, cooperation, and respect.”

To the extent that charter schools constitute a positive societal response to educational inequities, then advocates can and should make that argument. But it seems beyond the pale to transform the deaths of young black men in confrontations with police or, in Freddie Gray’s case, in police custody, into reasons for expanded charter schools. – Rick Cohen