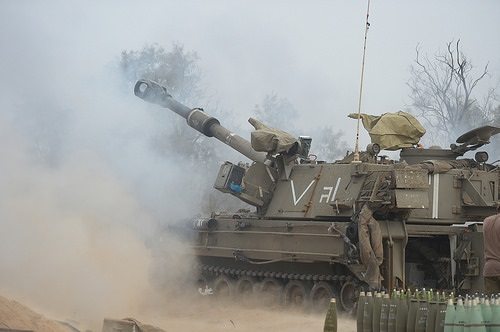 In the aftermath of the latest war between Israel and Gaza, and with indications that hostilities between Israel and Palestine may yet be renewed as the Palestinian Authority plans to take a bid for statehood and a timetable to get Israel out of the Occupied West Bank to the United Nations, there is a lot of attention in the U.S. to supporting Israel’s armed forces—notably, significant funding in the CRomnibus for the Israel Defense Forces and for the “Iron Dome” missile protection shield. However, assistance for the Israeli military doesn’t flow only from government sources, but also from charitable donors.

Haaretz has an article describing some of the complexities of providing assistance to the IDF through charitable arms such as Yashar LaChayal (Hebrew for “straight to the soldier”), Gear Up Our Soldiers (using crowdfunding to raise money), and PizzaIDF (which sends pizza and holiday foods to soldiers on the front lines). A well-known supplier of aid to Israeli soldiers is Friends of Israel Defense Forces (FIDF), a registered U.S. 501(c)(3) for which donations by U.S. taxpayers are federally tax deductible.

The FIDF and, apparently, many other charities that give to Israeli soldiers indicate that they don’t provide combat or tactical equipment, but they do provide material desired and appreciated by soldiers—for example, hats and neckwarmers for soldiers on Mount Hebron in the Golan Heights, supplied by Yashar LaChayal; ice and travel pillows for soldiers going into Gaza, also from Yashar; and from the FIDF, winter wear for soldiers. However, Gear Up for Our Soldiers has provided tactical gear, such as kneepads, combat gloves, and bulletproof vests.

FIDF raised $67.8 million in contributions in 2012 and $61.7 million in 2011, ending 2012 with a fund balance of $87 million. Aside from donations made through community foundations or federated foundations like the Jewish Community Foundation of Los Angeles and the Boston Foundation, the top U.S. foundations providing grants to the FIDF in the past several years, as reported on the Foundation Directory Online, include the foundations of Las Vegas casino mogul Sheldon Adelson, the Circle of Service Foundation (a largely youth-oriented funder in the Chicago metropolitan area), the Mitzi & Warren Eisenberg Family Foundation (established by the co-founder of Bed Bath and Beyond), and the Klarman Family Foundation (founded by investor Seth Klarman). Some seven-figure grants, including $1 million in 2011 and $2 million in 2012, came from the Marcus Foundation (founded by Home Depot co-founder Bernie Marcus) and multiple though smallish grants came from the Pritzker Family Foundation, related to but not controlled by President Obama’s Secretary of Commerce. More seven-figure grants come courtesy of the Saban Family Foundation (established by Haim Saban, whose entertainment distribution firm was known for its “Power Rangers” franchise) and the Baltimore-based Harry and Jeanette Weinberg Foundation—and that’s but a few of the many foundations that have assisted FIDF.

It is challenging to think about donating to the Israel Defense Force or Israeli charities that assist Israel in its military efforts, but the strategy of giving to 501(c)(3) public charities with the name “Friends” is a frequently pursued but not well understood mechanism in U.S. charity philanthropy. According to the Jewish Daily Forward, one out of every twenty dollars donated to a Jewish charity goes to a “friends of” group registered in the U.S. The Forward asserts that there are nine large Jewish “friends of”-type charities with administrative structures that include sizable salaries for their executives (for example, compensation in 2012-2013 of $723,000 for Marshall Levin, the executive vice president of the American Committee for Weizmann, almost double of his compensation the previous year).

Interestingly, FIDF provides online access to its financial audits and gets a top rating from Charity Navigator. It isn’t clear, however, whether the IRS audits “friends of” organizations, prompting experts to suggest that it would be better to have foreign charities simply register with the IRS to receive donations directly rather than through “friends” groups. However, it might be questionable to think that the Israel Defense Forces or, in other cases, entities that provide combat or technical gear for military purposes, soliciting tax deductible donations. In any case, it is a complicated and controversial issue in U.S. charity and philanthropy.—Rick Cohen