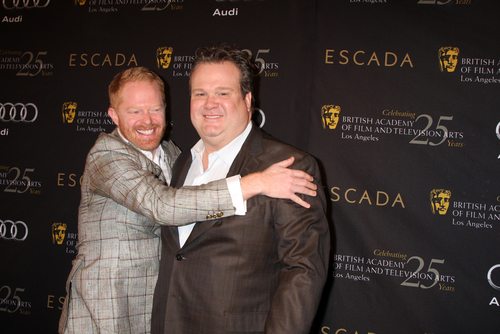 Jesse Tyler Ferguson, who plays Mitchell Pritchett on Modern Family, and his real-life fiancée, Justin Mikita, founded a nonprofit that sells designer bowties online, with the proceeds going to advocate for gay marriage. But the organization, Tie the Knot, was on a list issued in May by the IRS of those whose applications were flagged before progressing along to be approved. Tie the Knot had applied for 501(c)(4) social-welfare status.

Tie The Knot says that it has supported “the Human Rights Campaign, the nation’s largest LGBT rights organizations, to which we were able to write a $50,000 donation from the sales of a single line of bowties.…We also have donated to The Respect for Marriage Coalition, a partnership of more than 80 civil rights, faith, health, labor, business, legal, LGBT, student, and women’s organizations working together to end the Defense of Marriage Act and grow support for the freedom to marry.”

“Gays Beware,” a video featuring Ferguson and noted gay actor George Takei, is featured on Tie The Knot’s website. It’s hosted on FunnyOrDie.com, and you can watch it here.