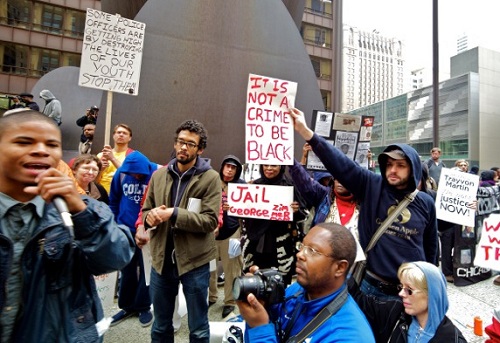 According to Mashable, GoFundMe removed the page because it conflicted with the website’s terms and conditions. While a spokesman for the company did not comment on what exactly in the terms and conditions was violated, since Slager has been charged with murder, the campaign could fall under the exclusion of “campaigns in defense of formal charges of heinous crimes, including violent, hateful, or sexual acts.”

Scott was pulled over for a routine traffic stop for a broken taillight, which apparently escalated into Scott’s run. Slager’s original story that he feared for his life because Scott had grabbed his taser was derailed once the video surfaced, showing little haste in getting Scott medical attention after he falls, wounded to the ground. Slager is also shown approaching Scott, dropping an object next to him, and then picking it up moments later. Slager was promptly fired from the North Charleston police department and charged formally for the murder. As is apparent from the video, none of the officers were performing CPR to help resuscitate Scott, who was later pronounced dead at the scene.

However, another crowdfunding site, Indiegogo, is hosting the fund for Slager. The fund was initiated by an “R Owens” and, as of this writing, has raised $1640 by 63 people.

“We’re campaigning to show our Support for Officer Michael T. Slager! We believe in all of our LEOs and want to publicly support them! Although he may have made mis-steps in judgement [sic] he was protecting the community. Michael is a former Coast Guardsman with two stepchildren and a wife who is expecting a child, served for more than five years with the department without being disciplined. Please help in any way you can. He has served five years with the department without being disciplined.”

In response to its decision to allow the campaign, Indiegogo said that its site “allows anyone, anywhere to fund ideas that matter to them and just like other open platforms—such as Facebook, YouTube and Twitter—we don’t judge the content of campaigns as long as they are in compliance with our Terms of Use.” Indiegogo does not seem to have the same restrictions in its terms of use as GoFundMe does.

This case follows months of tensions after a long string of shootings by white police officers of black civilian shootings. The Black Lives Matter movement, which started in 2012 after Trayvon Martin’s death, has gained serious traction over the past several months, both nationwide and worldwide.

There has been much in reaction to this specific shooting, particularly questioning what the response would have been had video not debunked Slager’s story.

Those responding include the North Charleston police chief, who expressed his own disgust at the shooting. “I have watched the video and I was sickened by what I saw. I have not watched it since,” Police Chief Eddie Driggers said during a press briefing Wednesday.

The local police association has also declined to help Slager with his legal fees. “Officer Slager’s case does not meet the SCLEOA criteria needed to provide him with legal representation through the association,” said Ryan Alphin, the executive director of South Carolina Law Enforcement Officers’ Association.

While serious questions have been raised about the training officers are receiving to handle such escalations with civilians, we must also evaluate the decisions of the other police officers as seen in this video. While officers did later arrive to administer medical aid, why was there no haste in immediately helping a suspect and a victim of multiple gunshot wounds?

There is an apparent gap in how society feels police officers should be conducting themselves and how some actually do. These officers are responsible to the impartial law and the society it governs. Those that cannot be trusted with that responsibility must be as promptly dealt with as Slager.—Shafaq Hasan