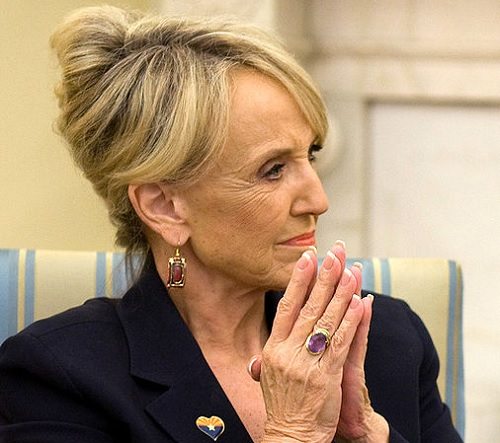 Governor Jan Brewer sided with the critics—as we thought she would and should. She vetoed the law passed by both houses of the Arizona legislature that would have allowed sincere religious belief to be the basis for businesses to discriminate against gays, lesbians, and other persons.

Having to deal with this cockamamie bill was probably the last thing Brewer wanted, concerned as she is about making the state more attractive for economic development investment, which this law would have undermined. Even with the bill not having been signed, the National Football League had begun looking for an alternative site for next year’s Super Bowl, and the Hispanic National Bar Association went ahead and canceled its 2015 conference planned for Phoenix.

It may have been the last thing Brewer wanted, but it was the first bill the Arizona legislature dumped onto her desk for signature in 2014. She let her colleagues in the legislative branch know how unhappy she was with the substance and the symbolism of the bill.

Other Republicans were pleased with Brewer’s veto. Senator John McCain had actively pressed Brewer to veto, and other prominent Republicans such as Mitt Romney, Newt Gingrich, and Florida governor Rick Scott had already registered their opposition to state-sanctioned discrimination. This is where the religious right bumps into business conservatism in the Republican Party. To the extent that Republican legislatures push this kind of legislation—and there are Arizona-like bills pending in other states—the less relevant the extreme wing of the Republicans will be.

It’s time for the authors of Arizona’s Senate Bill 1062 to join the twenty-first century, though for some of them, just making it to the late twentieth century would be an achievement.—Rick Cohen