Green Eggs and Shutdown: A Filibuster for a Budget 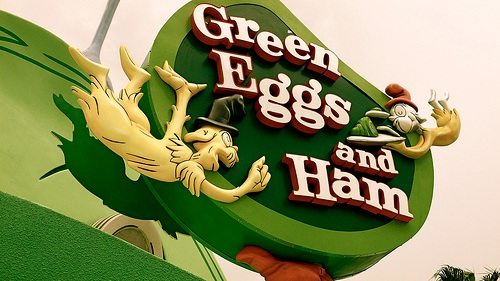 Senator Ted Cruz (R-TX) engaged in one of the strangest filibusters in history to stall the Senate’s consideration of a FY2014 budget resolution that might contain funding for the Affordable Care Act. It wasn’t a filibuster, because he was addressing something that couldn’t be filibustered, so he figured he’d take up airtime until he collapsed. The senator, roundly chastised by members of his own party as a flake on this score, would spend the time in an hours-long oration about the evils of “Obamacare.”

It must be difficult to stay on point and discuss the huge role of healthcare in the U.S. economy. Somewhere in the midst of his oration, the Texas Senator decided to read aloud the text of Dr. Seuss’s Green Eggs and Ham. His reasoning? He wanted to read a goodnight story to his children from the floor of the Senate. He added a couple of Bible verses for his daughters, as well.

Cruz also talked about his common interest with Harold and Kumar in the little greasy hamburgers served at White Castle restaurants. He was concerned that the president’s health insurance reform had convinced White Castle to open fewer new restaurants than it had planned. In fairness, he also expressed interest in Denny’s and Benihana. Somehow, even the senator’s admiration for Ashton Kutcher due to Kutcher’s speech last month at the Teen Choice Awards got into his non-filibuster filibuster.

Why does Cruz hate the law that will give healthcare insurance to millions of uninsured people? He might be the healthcare Grinch. Why was he motivated to drone on and on?

“Now, please don’t ask why. No one quite knows the reason.

It could be his head wasn’t screwed on just right.

It could be, perhaps, that his shoes were too tight.

But I think that the most likely reason of all,

May have been that his heart was two sizes too small.”

Before long, Cruz will have to give up the ghost—or his non-filibuster, that is. At that point, he might recall some more Seuss: “How did it get so late so soon? It’s night before it’s afternoon. December is here before it’s June. My goodness how the time has flewn. How did it get so late so soon?” That was used in Seuss’s obituary. By his waste of time on the Senate floor, Senator Cruz may have marched closer to his political obituary. If he keeps this up, his time in politics will have “flewn.”—Rick Cohen