Hail To the Washington You-Know-Whos 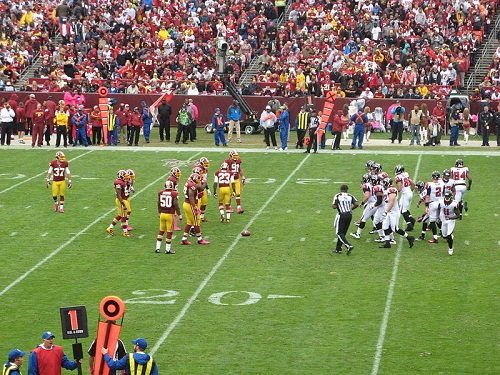 Remember that the National Football League is a 501(c)(6) business trade association, so positions pronounced under the NFL banner are not simply to promote the 32 teams authorized to play for a chance to win the Super Bowl, and certainly, we presume, not to promote the specific interests of the team in the Washington, D.C., metro area, but stand for all professional football, right? Right.

The NFL’s Roger Goodell last week wrote to the members of the Congressional Native American Caucus, co-chaired by Rep. Tom Cole and Rep. Betty McCollum, explaining that the name of the team associated with the District of Columbia (even though its games are played at FedEx Field in Laurel, Maryland) is, despite what some people allege, not a name that denigrates Native Americans. In fact, the Washington R*dsk*ns, Goodell writes, was a substitute for the team’s original name (the Boston Braves) was changed to R*dsk*ns by then-owner George Preston Marshall in order to avoid confusion with the Boston baseball team that still had that name. Goodell explains that “Braves” was a name that “honored the courage and heritage of Native Americans” and that “R*dsk*ns” continues that positive meaning.

Goodell writes, “For the team’s millions of fans and customers, who represent one of America’s most ethnically and geographically diverse fan bases, the name is a unifying force that stands for strength, courage, pride, and respect.” He believes and writes that the name was never ever, not ever, never meant “to denigrate Native Americans or offend any group.” The likelihood that the owner of the Washington franchise will change the team’s name is slim. Dan Snyder has previously been quoted as saying, “the Redskins will never change the name. It’s that simple. NEVER. You can put that in capital letters”.

Members of the Caucus were not persuaded by Goodell’s explanation. Rep. Eni Faleomavaega of American Samoa said that whatever the intentions and history, “the fact of the matter is that the term ‘Redskin’ is a racial slur that disparages Native Americans.” Describing Goodell’s explanation as “twisted logic,” Rep. McCollum said the letter was “another attempt to justify a racial slur on behalf of Dan Snyder and other NFL owners who appear to be only concerned with earning ever larger profits, even if it means exploiting a racist stereotype of Native Americans.”

McCollum’s response reminds us that if the NFL is true to its 501(c)(6) status, it is not simply speaking out in defense of Snyder or even the 32 official NFL teams, but about the business interests of professional football teams and leagues. Consequently, the implication of Goodell’s letter is that if there’s history behind the choice of a racially disparaging team name, and fan polls supporting the name, those things outweigh the reactions of groups that might—and in this case, do—find the name derogatory and racist.

The defense of the NFL’s Washington franchise is, of course, particularly ironic. A little more than half a century ago, the R*dsk*ns were the last NFL team to integrate (all the other NFL teams had integrated by 1955). In 1962, the team fielded Bobby Mitchell and two other black players. It did so, still under Marshall’s ownership, because the team was forced to integrate by President Kennedy’s Secretary of the Interior, Stewart Udall, who refused to give permission to the R*dsk*ns to play in the newly constructed D.C. Stadium, built on federal parkland, unless the team adhered to federal laws, including laws prohibiting racial discrimination in hiring. So, the last NFL team to accept racial integration—reluctantly, at that—becomes the avatar for a racially derogatory team name.

Professional sports harbors some racially offensive practices, particularly the most egregious of all team-supported practices, the “tomahawk chop” used by the fans of Major League Baseball’s Atlanta Braves. MLB, however, isn’t a 501(c) tax-exempt entity. The National Football League is. Under what conception of the best interests of professional football can the 501(c)(6) NFL really justify the Washington franchise’s name?

Two major Washington-based sports commentators, longtime fans of the team, responded to the Goodell letter with derision. On their PTI television show, Tony Kornheiser and Michael Wilbon offered these comments:

Wilbon: “I’m not surprised. I don’t have any faith in the NFL. But what really disappoints me is Roger Goodell, because now I don’t have any faith in him…[I]n this instance, he has no courage…What he’s done is gutless…There’s nothing positive about it. Redskin is like using the N-word to African American people, okay? Let’s not mince our words here. Roger Goodell sounds like a fool. He sounds like someone who doesn’t have the courage to confront one of his own member-institutions and its owner, Dan Snyder…This is really, really an outrage, or ought to be.”

Kornheiser: “I’m surprised, because I thought he would go to the owner, Daniel Snyder, and force him to change the name, give him cover by saying I’m making you change the name. Because everybody who lives in Washington—as we do—knows that no disrespect is meant…Nobody regards it as a racial epithet. But it is. It’s not even being politically correct; it’s being fair, it’s being equitable. I mean, you CANNOT go to a reservation and say ‘Hi, Redskins.’ You CANNOT do this.”