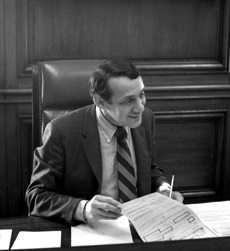 Harvey Milk was honored yesterday as a new postage stamp with his face and name emblazoned in black and white thereon was unveiled at a “first day of issue” dedication ceremony at the White House. Milk, a well-known gay activist and one of the country’s first openly gay politicians, was shot to death along with Mayor George Moscone in 1978. He was a high-profile member of the San Francisco Board of Supervisors.

Samantha Power, the U.S. Ambassador to the United Nations, was at the ceremony and urged people to continue their activism for gay rights, reminding the crowd that there still are seven countries where people can be executed for being gay.

Nancy Pelosi, the Democratic leader in the U.S. House of Representatives, remembered aloud attending Milk’s funeral. “I thought, is this how it ends?” she said. “But it really was just the beginning of the impact that he…would have. So it’s pretty thrilling for us who knew and loved him and saw his courage first hand.”

“Let this stamp remind us of the fundamental truth behind Mr. Milk’s message—that we all have a stake in equality,” said Deputy Postmaster General Ronald A. Stroman. “Let this stamp inspire a new generation to continue Harvey Milk’s legacy—to keep working toward a world where prejudice gives way to acceptance, where division gives way to unity, and where fear gives way to hope.”

Stuart Milk, president of the Harvey Milk Foundation, said, “We have to teach history so that we don’t repeat history, and so this is a great way of doing that.”—Ruth McCambridge