Egyptian Women Comment on US Civil Society: An Interview with Rick Cohen 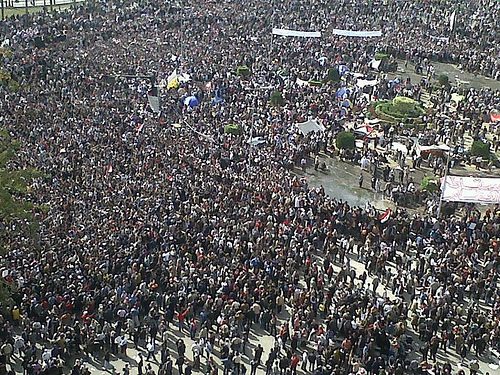 Three young Egyptian women working in the United States as Atlas Service Corps fellows agreed to speak to the Nonprofit Quarterly about what they are learning in the U.S. nonprofit sector, and what they will bring back as lessons, skills, cautions, and ideas for an Egyptian civil society that is in the middle of a revolution that is far from over. The weekly demonstrations continue in Cairo’s Tahrir Square, filled with protests about the persistent increases in food prices (which led to some of the original protests), the reluctance or failure of the interim government to prosecute police and security forces that shot and killed peaceful protesters during the spring, and the emergence of an increasingly powerful “Islamist” movement of Salafist and Muslim Brotherhood activists advocating a more religious future for the nation that is “neither secular nor liberal”.

To have left Egypt close to the start of the historic overthrow of the Hosni Mubarak regime and come to the United States for a year of “direct service fellowships at organizations to learn best practices, build organizational capacity, and return home to create a network of global changemakers” puts these three young women—Sally Salem, May Kosba, and Mirette Bahgat—between two worlds. They get to experience a sliver of the nonprofit sector through their work with host organizations in the United States (that pay $29,500 in a VISTA/AmeriCorps-like cost-sharing for their full-time service) while watching the turmoil of their homeland from afar.

Sally Salem is working at the Grameen Foundation, but it is hardly her first experience in the non-governmental sector. In Egypt, she worked for a variety of NGOs, designing and training people in program development. Placed at the National Conference on Citizenship, May Kosba has been a fundraising consultant, grant-proposal writer, and trainer for several Egyptian nonprofits, and has represented Egyptian youth in the United States on various occasions. Mirette Bahgat comes from the community development sector, though she started her career as a banker with HSBC Egypt. Her Atlas Corps host is Civic Enterprises.

These may be young women, but they come to the United States with experience in Egyptian NGOs and with an acute sense of their roles in a political upheaval unlike any that has affected their home country since the overthrow of King Farouk by Gamal Abdel Nasser, in 1952. Here is what May Kosba wrote in the Atlas Corps blog about the dynamic of the revolution and the protests occurring in Tahrir Square before she left for the United States:

“Protesters were not just in Tahrir Square but in millions . . . across the republic echoing Tahrir’s demands. People took their political debates and arguments on the phones, on the streets, and online . . . Tahrir in Arabic means liberation. The protesters choice of protesting in Tahrir Square in Cairo on January 25th calling for freedom was symbolic. Yet the unintended outcome of their perseverance drastically altered the world’s estimation of the real power of Egyptians to force the former leadership to step down for the first time in approximately six thousand years of Egypt’s history . . . When millions risked their lives and took their anger to the streets, I had no other option but keep my anger indoors. This might come across as a proclamation of cowardice, but it was more likely a mixture of a stunned and paralyzed will to venture out to counter the violence and stay alive at the same time. Leaving was challenging due to lack of resources and information when communications were cut off, as well as danger lurking at every corner even on your way to Tahrir. Amid the chaos and chants echoed across the world, I, like many others, was busy watching the situation unfold on the ground on a foreign TV channel (Al-Jazeera).

Police released criminals from prisons to attack not just protestors, but also citizens. So the situation dictated that I had to stay home with my mother, sister, and grandmother to protect our house from thug attacks . . . Extensive debates and statements on Facebook and Twitter was my major role. I figured if people were encountering violence in Tahrir, the least I could do was tweet . . . And although I have been one tweet away from keeping the voices of protestors in Tahrir alive online, deep down in me I had my own demons and doubts about getting where we are today. But doing anything else but protesting for Tahrir, the liberation, and the square’s demands would have been treacherous to those who have lost their lives for our freedom.”

Sally Salem told NPQ, “The problems we had before the revolution are the same, [they] are not going to solve themselves.” In a distinctive way in the midst of an ongoing revolution, every Egyptian nonprofit has a potential social change role to play, whether or not it is directly engaged in the poverty and hunger issues, for example, motivating some of the Tahrir Square protesters. “Now everyone is aware that they can do something and they need to do something,” she said. Sally noted that prior to these protests, people were skeptical that anything could be done, but “now people are aw