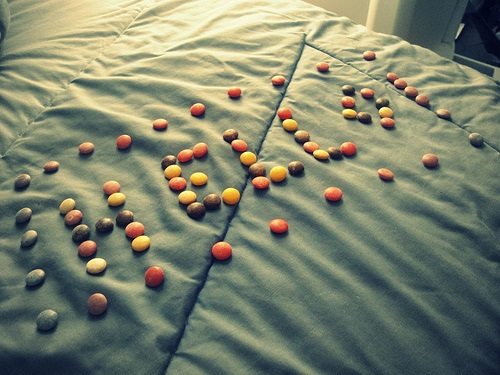 NPQ has covered a few other cases where nonprofits were charged with copyright infringement, with perhaps the most obnoxious being the threat of a suit by Kellogg against a small Mayan cultural group who had a toucan as its logo

Now, the Hershey Company has filed a copyright infringement and dilution suit against a Seattle marijuana cooperative for using names like “Reefer’s Peanut Butter Cups” along with designs that may suggest a Reese’s Peanut Butter Cup. Additionally, “Mr. Dankbar” packaging may recall Mr. Goodbar’s. In this instance, we think they may have a reasonable case.

“This is a time—a new frontier, a lot of changing policies within our country right now and I think these are issues that we’re going to be grappling with as the cannabis industry grows up and moves to the next level and becomes a more mainstream commodity,” said McPeak.

This comes on the heels of Maureen Dowd’s column about eating too much pot-infused candy, which she said looked like the Sky Bars she ate in her youth. But here was her problem: “Sitting in my hotel room in Denver, I nibbled off the end and then, when nothing happened, nibbled some more.”

Oh, Maureen. Her story about edible forms of pot progresses in a somewhat familiar vein (at least familiar to me):

“For an hour, I felt nothing. I figured I’d order dinner from room service and return to my more mundane drugs of choice, chardonnay and mediocre-movies-on-demand.

“But then I felt a scary shudder go through my body and brain. I barely made it from the desk to the bed, where I lay curled up in a hallucinatory state for the next eight hours. I was thirsty but couldn’t move to get water. Or even turn off the lights. I was panting and paranoid, sure that when the room-service waiter knocked and I didn’t answer, he’d call the police and have me arrested for being unable to handle my candy.

“I strained to remember where I was or even what I was wearing, touching my green corduroy jeans and staring at the exposed-brick wall. As my paranoia deepened, I became convinced that I had died and no one was telling me.”

Now, Maureen survived it just fine and may even be better for it, but I think many of us can agree that packaging which makes something look like tasty candy may be ill-advised, especially if it reminds us of the kind of tasty candy that won’t make us get unhappily obsessed with our pants. Children like candy, and sometimes they sneak it when we are not looking.

These kinds of moments remind us that we regulate industries sometimes for good reason. It will be interesting to see where this goes.—Ruth McCambridge