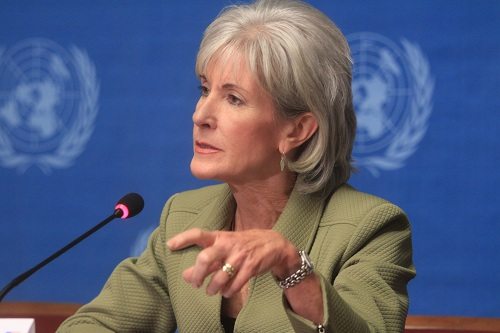 The sequence is this: Congress finally passed the Affordable Care Act in 2010, but since then, the Republican majority in the House of Representatives has done whatever it could to starve the government of funding to implement health care reform. In an effort to get uninsured people to enroll for health insurance, Health and Human Services (HHS) Secretary Kathleen Sebelius approached H&R Block and the Robert Wood Johnson Foundation and suggested that they fund Enroll America, a nonprofit that would help get uninsured people onto health insurance, sparking Republican concerns that Sebelius might be violating federal law and federal ethics in soliciting private money for outside groups. Now, Republicans have succeeded in getting the Government Accountability Office (GAO) to agree to audit her fundraising.

What was Sebelius’s motivation? She knows that without effective outreach and enrollment, the ACA will be in trouble. She responded to a House committee in early June that her efforts to raise money for Enroll were authorized by the Public Health Service Act, which allows for public-private partnerships in efforts to promote public healthcare.

What is the Republicans’ motivation? At this point, it is nothing new: another roadblock to delay and derail the Affordable Care Act, which they have failed to achieve despite 37 votes in the House to date to repeal the legislation. But if there is a GAO study—all of this has been reported verbally, with no written agreement from the GAO so far, according to Reuters—what should the audit examine? Here are our thoughts:

Remember, this will be a GAO audit, and GAO works for Congress. But it doesn’t work for Democrats or Republicans. According to GAO operating standards, the independence of its audit function is crucial, as conveyed by this written standard: “In all matters relating to the audit work, the audit organization and the individual auditor, whether government or public, should be free both in fact and appearance from personal, external, and organizational impairments to independence.” The GAO will be doing an audit, not a political attack piece.

While we have noted problems with Sebelius’s fundraising and the explanations that were less than full and rapid, the GAO request looks like one of a number of continuing efforts by House Republicans to find a link between the White House and a possible scandal, as with the IRS, Benghazi, and Fast and Furious—all of which may be examples of federal government mismanagement, but not the Oval Office-directed corruption that the likes of Darrell Issa had hoped to uncover. Wouldn’t it be a pleasant change if both Congress and the White House were simply, truly interested in remedying governmental dysfunction?—Rick Cohen