Historical Analysis of the Giving Pledge: Was It a “Blind?” 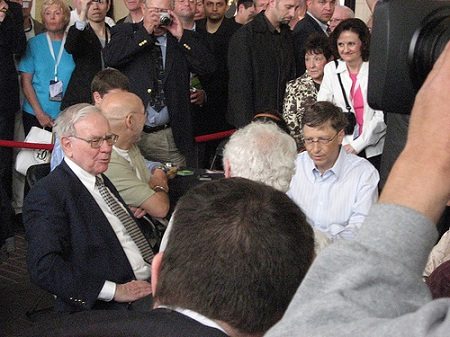 A recent interview in The Atlantic with American historian Robert Dalzell contains some interesting speculations about Bill Gates and Warren Buffett’s motivations for the Giving Pledge. Dalzell is the author of The Good Rich and What They Cost Us. He poses a question definitely relevant to our age of widening inequality: “How do you place those two things, great wealth and equality, next to one another, and say ‘these are the good things about American life and society?’” Now here comes the good stuff…Dalzell evidently believes that the timing of the Gates and Buffett philanthropic initiative was no accident. He tells The Atlantic’s Heather Horn:

“I don’t think it was an accident at all. I think it was defensively conceived. It was a time when because of the economic downturn, the economic crash, ‘08, ‘09, there were certain people who were quite concerned about what this was going to mean to the rich who could be blamed in significant measure for what had happened. I think that Gates and Buffett, who conceived the idea of the Giving Pledge, did it as a strategy for pulling some of the claws of the rising discontent and dislike of the rich, among Americans. It’s interesting, because it hasn’t really worked all that well. I mean, if you look at the number of the Forbes 400 who have signed on to the giving pledge (and they’re the group that Gates and Buffett were targeting) it isn’t all that many of them.”

Dalzell says that there is a historic pattern of an increase in very public giving when the U.S. has been on other financial precipices, as in the Gilded Age and the Great Depression: “When things get palpably unequal enough, there is a response in society, which is uncharacteristic, and we do begin to look harshly at the rich and even look at their generosity as something which is in many ways essentially defensive. That has happened before twice in recent history—in the 1890s and in the 1920s. The great question is whether it’s happening now, and how far it will go now.”

We’d love to hear reader reactions to Dalzell’s observation. It certainly makes us want to read the book! –Ruth McCambridge