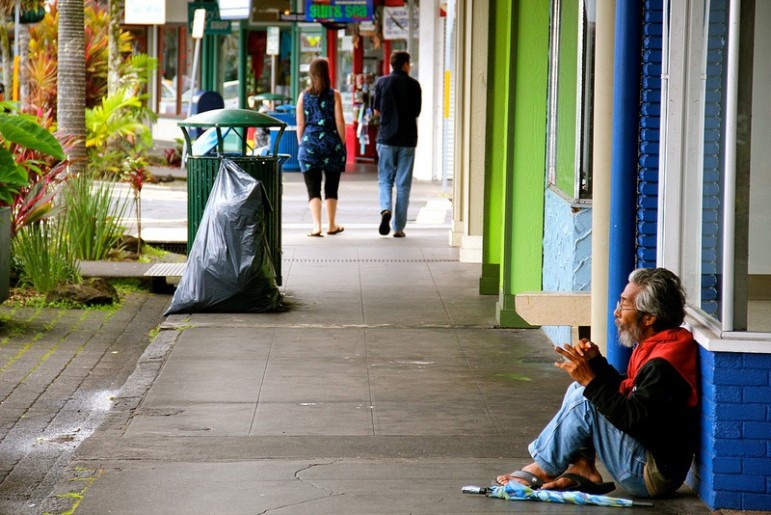 According to the Economic Policy Institute, seventy percent of the American workforce’s adjusted hourly wage is lower today than it was in 2007. As wages decrease, more Americans live paycheck-to-paycheck, unable to save. Without a financial cushion, an unexpected expense can spiral quickly, leading to homelessness. As the number of homeless people grows, more and more cities are struggling to provide services.

Last week, Hawaii’s Governor Ige declared a state of emergency, but it wasn’t due to any natural disaster. Instead the disaster stemmed from the state’s growing homeless population. From mid-2014 to mid-2015, the number of homeless individuals in Hawaii increased by 23 percent and the number of homeless families almost doubled. Today, 465 people per every 100,000 in Hawaii are homeless.

Honolulu’s Kakaako district once contained one of the largest homeless encampments in the country. Slightly fewer than three hundred people slept in tents and other semi-permanent structures overlooking one of the state’s most famous beaches and tourist areas. City officials cleared the camp in a little over a month, dismantling shelters and throwing out residents’ possessions. The ACLU unsuccessfully filed a class action lawsuit to block the sweeps. During that month, social service agents attempted to find residents shelter and other resources.

Over the next nine months, the state is dedicating $1.3 million to build new housing, including temporary shelters made of shipping containers for 1000 individuals.

The state of Hawaii is not the first municipal division to declare a state of emergency due to a surge in homelessness. Last month, the Los Angeles City Council made a similar declaration. In the past two years, the homeless population in L.A. has grown 12 percent. Officials propose to focus $100 million on the crisis.—Gayle Nelson

More about: housing the homelessNonprofit NewsPolicy