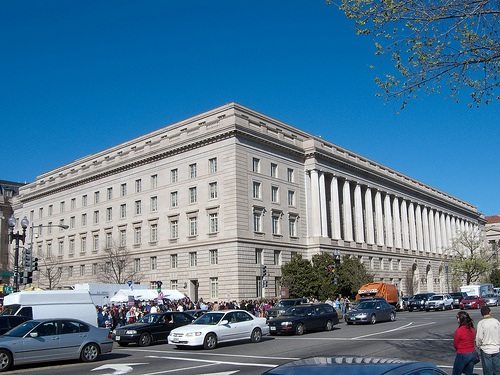 Eighteen GOP members of the House Oversight and Government Reform Committee have introduced a resolution seeking to impeach IRS Commissioner John Koskinen for incompetence and specific acts associated with investigation of the IRS scandal.

“Commissioner Koskinen violated the public trust. He failed to comply with a congressionally issued subpoena, documents were destroyed on his watch, and the public was consistently misled. Impeachment is the appropriate tool to restore public confidence in the IRS and to protect the institutional interests of Congress.”

The press release from the House Oversight Committee, including the names of the members seeking impeachment, may be found on the committee’s web site. There are 43 members of the committee (25 GOP, 18 Dem), so additional committee members would have to support the resolution before it could be approved by the committee and proceed to a vote by the full House. If the House of Representatives were to vote to impeach the IRS Commissioner, the impeachment trial would be held by the U.S. Senate, with a conviction requiring 67 votes.

This action by House Oversight Chair Jason Chaffetz (R-UT) is another episode in a long-running drama. It follows closely upon the U.S. Justice Department announcing that former Exempt Organizations chief Lois Lerner would not face criminal charges associated with the IRS scandal. It also follows unsuccessful calls from committee members and others for President Obama to fire Koskinen.

Impeachment is a rarely used congressional power, and it rarely results in a Senate conviction. Both impeached U.S. Presidents (Andrew Johnson and Bill Clinton) were acquitted by the Senate, as was the only cabinet member ever impeached, William Belknap. Only a handful of federal judges have been impeached by the House of Representatives and successfully removed from office by the Senate, according to Wikipedia.

Is this latest action a fit of pique? An effort by frustrated legislators to be seen as doing something and finding an outlet for their restlessness? Is it an effort for Congress to insist on enforcement and accountability in the face of the Obama Administration’s refusal to act? Is it a “warning shot” to U.S. Attorney General Loretta Lynch, who may have to decide whether Hillary Clinton will be indicted based on the current FBI investigation into her e-mail server? At the very least, the prospect of impeaching the IRS Commissioner is likely to further distract and delay reform and rebuilding efforts at the IRS, especially focusing on the Exempt Organizations unit generally and pending regulatory issues like regulating the political activity of nonprofit organizations as a specific issue.—Michael Wyland