House Republicans Want to Cut $20.5B from Food Stamps 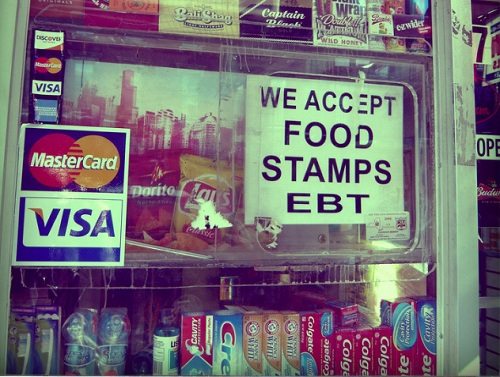 The NPQ Newswire has covered threats to the food stamp program before, including recent attention to Senator David Vitter’s (R-LA) efforts to restrict access to Supplemental Nutrition Assistance Program (SNAP) benefits. This article by Eleanor Clift, concerning the problems facing those 47 million Americans who receive food stamp assistance, brings up questions that coincide with our belief that, based on their statements, some of the more conservative wing players in the Republican Party are ideologically opposed to the expanded availability of food stamps. (Granted, some readers of NPQ have challenged that.)

The program has grown since President Obama’s first term in office, as he expanded benefits for people during the recession. House Republicans want to cut $20.5 billion over 10 years from the program, in stark contrast with the $4 billion cut approved by the Senate last week. Rep. Emanuel Cleaver (D–MO) anticipates a big fight on the floor as Democrats try to stem the Republicans’ cuts in food stamps. He predicts that “the bill coming out of the House will cause many people to puke because of the damage done to the poorest people.” Cleaver sees the Republicans’ proposal as having a racial component. Given the somewhat disproportionate numbers of people of color receiving food stamp assistance, even though more white people than black people overall receive food stamp assistance, that’s not a hard stance to understand.

Since food stamps have been the subject of so much dubious debate, particularly during the 2012 election, when Newt Gingrich called President Obama the “food stamp president,” some facts on the racial and ethnic composition of food stamp recipients are in order (from Fiscal Year 2011 statistics):

The disproportional structural impact on people of color is clear from this table. “What’s been sold over the years is that SNAP is an urban program, and the word ‘urban’ can sometimes be a substitute for black or brown,” Cleaver notes.

However, we also see in this the hand of an increasingly ideological opposition from what Clift describes as the “newly ascendant libertarian wing of the GOP.” She quotes an unnamed House Democratic aide who says that these Republicans “see a program that helps people who aren’t helping themselves, and they want to kick the crap out of it.” That is underscored by the radio ads running from the Heritage Foundation that allege that select Democrats and Republicans are, in Clift’s words, “backing a farm bill that is really a food-stamp bill.” (The Koch brothers-funded Americans for Prosperity has taken a similar tack to oppose the farm bill as a “welfare bill.”) However, Clift notes that, “Sixty percent of working-age people in the program are women, most with children, and if the cuts go through, 210,000 children would lose their free school-lunch benefit.”

It seems to us that the libertarian Republicans in Congress and in the U.S. body politic are less disposed to entitlement programs than their mainstream Republican forebears. Maybe food stamp recipients look like government-dependent “takers” to some in Congress, but to us, they seem to be lower-income households constrained in their choices between turning to nutritional assistance or being unable to feed their families.—Rick Cohen