Death of the Hull House: A Nonprofit Coroner’s Inquest 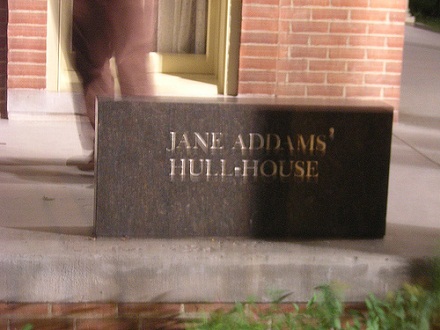 When Hull House, founded by legendary social activist Jane Addams, closed down early this year, the reverberations of the failure of the nation’s most famous settlement house were somewhat muted. Was it that the modern era Hull House was so different from the Hull House Addams described in her autobiographical 20 Years at Hull-House that the place had lost its symbolic meaning for the nonprofit sector? Might there have been the presumption that the day of Hull House—and perhaps much of the settlement house movement that flourished around the turn of the century—had simply passed?

Or, was the bankruptcy of Hull House, despite the organization’s amazing history, just another example of a nonprofit caught in an exorable spiral of decline due to the usual factors we all associate with nonprofit shutdowns?

Although the settlement house movement doesn’t add up to the hundreds of facilities that existed in the decades before World War I, many settlement houses that got their start during that era still exist, function, and in some cases, thrive. Examples include the Henry Street Settlement in New York, founded by Lillian Wald in1893, University Settlement in Cleveland, founded in 1926 to serve the Broadway/Slavic Village neighborhood, and the Community Settlement Association, serving the Eastside neighborhood of Riverside, Calif. Was Hull House, founded by Addams in 1889, destined to die, or could it have modified itself to survive and thrive?

Originally, the settlement house was not about the delivery of charitable services. Rather, like Addams’ Hull House, it was meant to be an inner-city residence for settlement workers who would deliver educational, art, music, and cultural programs to address the spiritual poverty of poor people. Typically, like Hull House on Chicago’s Halsted Street and the Henry Street Settlement in the Lower East Side, they viewed poverty as more than a financial condition. Largely directed, initially, by affluent but socially concerned people like Addams, the early settlement houses and settlement workers, many of them volunteer, saw themselves as bridging a socio-economic chasm, helping the poor immigrant communities surrounding them while also learning from their poor neighbors.

But in learning from the poverty-stricken, often immigrant neighbors, the settlement houses became political institutions, beacons of advocacy for issues such as an increased minimum wage, labor rights, child labor laws, and decent (and nondiscriminatory) provision of public services. In a memorable part of her 20 Years at Hull-House, Addams wrote about her advocacy for improved garbage collection and sanitation in the 19th ward where Hull House was located, pressuring the alderman for better services, and eventually serving for a time as the ward’s garbage inspector to identify for the city exactly where the garbage was that needed to be addressed.

Just think of the people who lived and worked at Hull House: Mary McDowell, who worked to support the trade unions in Chicago’s “back of the yards” neighborhood; Frances Perkins, who later became the U.S. secretary of labor and the first woman appointed to the presidential cabinet; Julia Lathrop, who became the first woman to ever head a federal bureau when she became director of the United States Children Bureau; and Florence Kelly, who became head of the National Consumers League. As for Addams, the founding director of the FBI, J. Edgar Hoover, called her “the most dangerous woman in America.” Theodore Roosevelt admired her greatly, but also called her dangerous when she became one of the most famous and influential pacifists opposing U.S. entry into World War I. Although she seconded Roosevelt’s nomination for president in 1912, she broke with him when he refused to allow African Americans to be part of his Progressive (Bull Moose) Party. A co-founder of the NAACP, the Women’s International League for Peace and Freedom, and the American Civil Liberties Union, she probably deserved and appreciated the Hoover epithet.

Addams might have been seen by J. Edgar as a dangerous radical because she invited anarchists, labor organizers, and others to lecture or even conduct meetings at Hull House, but the accomplishments of Hull House would make her an essential woman in turn-of-the-century America. Among Hull House’s feats that have shaped much of what we know today are these: it created the first public playground in Chicago, the first public gymnasium in Chicago, the first public swimming pool in Chicago, and the first citizen preparation classes in the United States. Believing in the importance of facts and data, Addams led Hull House into investigations of sanitation, truancy, tuberculosis, infant mortality, and cocaine use in Chicago, prompting changes in laws and public programs. In its first few decades, the Hull House of Jane Addams was a beacon for social change and the delivery of services was secondary, or even tertiary, in the original settlement house concept.

Addams and Hull House aimed to change the conditions of poor immigrant communities and the mindsets of both the poor and the privileged. But she knew that nonprofits, charitable giving, and philanthropic grantmaking were but a drop in the bucket for the changes that were needed. To Addams, the settlement was all about social change. As she wrote, “The educational activities of a Settlement, as well as its philanthropic, civic, and social undertakings, are but differing manifestations of the attempt to socialize democracy, as is the very existence of the Settlement itself.”

Why the Failure? Possible Causes of Death

On January 19th this year, the leadership of Hull House announced that the organization was going to shut down in the spring due to a lack of money. A week later, it precipitously closed its doors and laid off its entire staff with no notice, no compensation, no payment for accumulated vacation time, and no health benefits. It was a remarkable turn of events for an iconic institution.

In this brief piece, we cannot possibly provide a comprehensive analysis of all the challenges and mistakes that might have been made over more than 100 years of Hull House operations, but the various elements of news coverage suggest hypotheses as to possible causes of death and lessons for us all.

A Bad Case of Founder’s Syndrome?

Founder’s syndrome is a cute piece of nonprofit parlance that sounds trivial in the context of Jane Addams. In most instances of founder’s syndrome, one finds the story of a longtime executive director who has to be dragged from his or her office kicking and screaming. Addams was actually relatively ill for some of the later years of her life before she died of cancer in 1935, so she had been letting go of Hull House for some time. The issue wasn’t about her not letting go, but it might have been more about who among her potential successors could claim the mantle of “owning” and living the ideas of Saint Jane. According to most histories, after her death, the battles over the operations of Hull House between the head resident who followed Addams, Adena Miller Rich, and the president of the board of trustees, Louise deKoven Bowen, occurred daily—on everything, big and small. Before, Addams was both head resident and in control of the board. The split played out terribly until Rich resigned. Subsequent head residents (the title was later changed to “director”) displayed their distance from the ideas and direction that Addams had displayed so forcefully for so many years. In the case of Hull House, this might have been one