Humanitarian Aid as an Act of Aggression 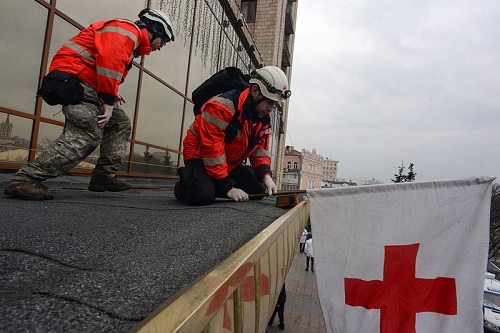 Last Friday, Russia sent more than 200 trucks with what they said were humanitarian supplies over the Ukraine border. Ukraine, in the midst of what President Poroshenko terms an “undeclared war” with separatists who have Russia’s support, was naturally suspicious of the convoy and insisted upon a process that would involve the Red Cross in inspecting and accompanying the supplies. But after repeated delays, the Red Cross refused to participate because their requirements for safe passage were not met.

The convoy came through anyway in what Ukraine has termed an invasion of sorts. Secretary General Anders Fogh Rasmussen of NATO made a statement condemning the convoy’s entry, and according to the White House, Vice President Biden “commended Ukraine’s restraint in the face of Russia’s blatant provocation and disregard of Ukraine’s sovereignty.”

Meanwhile, as the trucks returned to Russia, that country congratulated itself on a successful humanitarian mission. The fact that the trucks went in and returned without incident—most of them, anyway; reportedly, only 185 were counted as coming back, with the others suspected as having been diverted to Donetsk—is being seen by some to be a PR win for Russia, in that it places those who were suspicious in a position where they might be viewed as alarmist.

Obama Calls on Youth to Get “Fired Up” about Inequality...