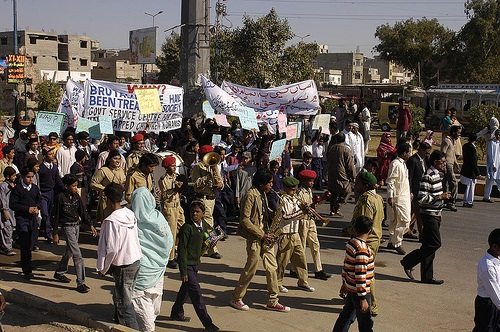 When you’re reading about the trials and tribulations of nonprofits in the U.S., just remember the courage it takes to be engaged in delivering humanitarian aid in conflict areas around the world. Last week, gunmen in Karachi, Pakistan, kidnapped two men who worked for the United Nations Children’s Fund, commonly known as UNICEF. This follows on the kidnapping of three men who were working for a Saudi NGO constructing homes in Karachi.

All too often, the victims are not just NGO workers, but the beneficiaries of institutions operating in these conflict zones. The most horrendous example of recent weeks has been the mass kidnapping of over 120 girls by the organization known as Boko Haram (which means, in a Hausa dialect, “Western education is sin”) from a secondary school in the northeastern Nigerian town of Chibok.

As has probably been the state of affairs for a long time, there is little in the way of safety guaranteed for humanitarian aid workers. In Bor in South Sudan, armed forces of one sort or another stormed a United Nations compound housing nearly 5,000 displaced persons, killing and wounding dozens and prompting Oxfam to reconsider its security procedures, given the difficulty in relying on the safety of a UN camp for its workers engaged in a water and sanitation project.

Even when rebels or government authorities aren’t engaged in attacking or kidnapping aid workers, some governments do all they can do to make humanitarian aid next to impossible. In the Sudan, where a truly retrograde regime holds power, the government has suspended the activities of the International Committee of the Red Cross (ICRC) because it refused Khartoum’s request that its resources be transferred to the Sudan Red Crescent. More recently, the Sudanese government expelled the British aid organization Merlin because it had merged with Save the Children, which Khartoum had expelled earlier (in 2009, Save the Children/US was booted by the government along with Doctors Without Borders/Médecins Sans Frontières, the International Rescue Committee, and Oxfam/Great Britain.)

It takes a tremendous amount of courage—institutional and personal—to commit to delivering aid in conflict areas where abductions and murders are disturbingly frequent and conducted with impunity. Everyone should take time to remember the aid workers who risk their lives trying to help people. They represent the best of all of us.—Rick Cohen