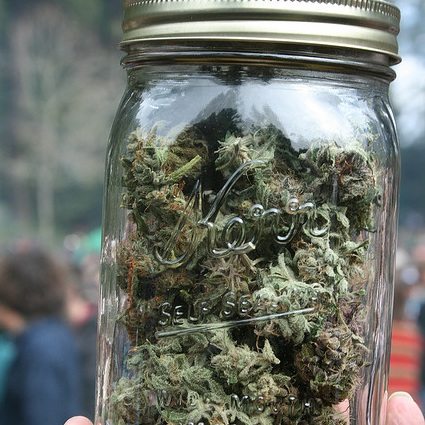 Humboldt County in Northern California is known as the epicenter for much of the nation’s high-grade marijuana. A recent study suggests that the farther from Humboldt, the higher the price. Humboldt State University has, in the past, tried to distance itself from the weed, but it has now decided that with increasing numbers of states in various stages of legalization, they could actually capitalize on the region’s unique niche—its brand, so to speak.

“We are uniquely qualified to be studying marijuana and its impacts,” says Josh Meisel, an associate professor of sociology and co-director of the Humboldt Institute for Interdisciplinary Marijuana Research, which is part of the California state university system, “acknowledging that the marijuana industry exerts a substantial influence on the economic health and social fabric of this community.”

The new institute will study and be a clearinghouse for research on the growth, sale, consumption, and regulation of cannabis, answering such questions as: Can people consume any amount of marijuana safely before driving? How does having access to legal marijuana affect the likelihood that a person will abuse alcohol? How much would consumption of marijuana rise if legalization drove its price way down?

These questions and many others—for instance, whether it helps with depression—remain unanswered because the use of the drug has been criminal. They should keep the institute busy for decades.

This article states that medical researchers exclude questions about marijuana from many long-term health surveys for fear of lowering response rates. Roger A. Roffman, a long-time researcher of the medical effects of marijuana at the University of Washington at Seattle, says, “If the people you want to study have to mask their identities and what they are doing because of the dangers of criminal prosecution, it makes it hard to have faith that you are collecting data that is representative and reliable and valid…we are just on the cusp of being able to address the fascinating, and very important, questions about the positive consequences of marijuana use.”

Peter Reuter, a professor of public policy and criminology at the University of Maryland at College Park and the founder of RAND’s Drug Policy Research Center, says, “We are, essentially, as knowledgeable about marijuana’s health effects as we were about tobacco’s 50 years ago, which is a pretty miserable…there are almost no studies of the industry of marijuana production.”

The Humboldt institute is no hippie haven. Its charter calls for it to close immediately if it supports illegal activities or takes money that has originated from illegal sources. But the author of the linked article, Peter Schmidt, makes a good point in saying, “Legalization at the federal level, on the other hand, would force the institute to grapple with a whole new set of ethical questions, like those faced by organizations that do research on tobacco or pharmaceuticals. Would it accept funds for research from marijuana growers or sellers? How could it ensure its independence?”

Erick Eschker, a professor of economics at Humboldt State and co-director of its marijuana institute, “We don’t want to be accused of having an industry drive our results. That would be awful for us.”—Ruth McCambridge