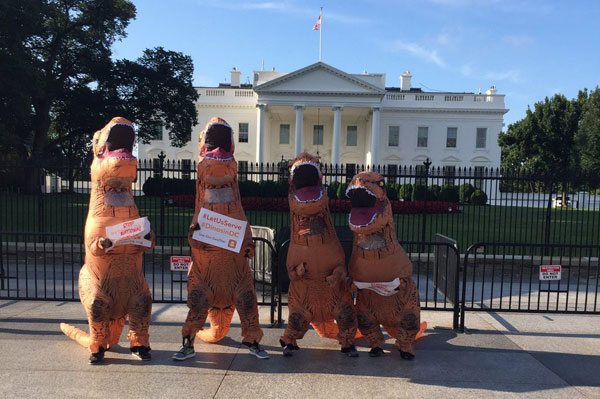 After tens of millions of years spent in hiding in the Earth’s crust, dinosaurs are finally taking a stand for something worthwhile: the preservation of AmeriCorps, the dynamic domestic sister of the world-renowned Peace Corps program, funded through the Corporation of National and Community Service (CNCS).

Well, not really. Actually, upwards of one hundred people dressed as dinosaurs stood at landmarks around Washington, D.C., on Wednesday morning, holding signs and chanting slogans to create public awareness of the existential threat to AmeriCorps under the sharp axe of the Trump administration. AmeriCorps has channeled a full million civic-minded heroes in the last 20 years into community service ventures throughout the United States. Now Trump, through his fiscal minions, is signaling his intention to end the program, as his first budget wish list states that the federal government is not a civic organization: “Funding community service and subsidizing the operation of nonprofit organizations is outside the role of the Federal Government.”

That characterization of the federal mission would come as news to every previous president—even former Republican presidents, who knew the powerful impact the governmental imprimatur has to leverage and foment the spirit of private organizational and individual giving.

After millions of years hiding in the Earth’s crust, dinosaurs are taking a stand for something worthwhile.Click To Tweet

AmeriCorps is one of many laudable non-defense federal programs with tremendously cost-effective mission execution. The nonprofit Service Year Alliance is the mastermind behind this Jurassic-come-lately movement called “Stop National Service Extinction,” launched when President Donald Trump initially called for eliminating the funding for the CNCS itself, which currently underwrites 80,000 volunteers through various AmeriCorps programs. SYA’s Director of Communications Aly Ferguson explains that as a protest motif, “extinction makes the most sense given that there are 1 million people who have done AmeriCorps over the past 20 years.”

Ferguson classifies AmeriCorps preservation as a bipartisan goal, and she is not content just to save its current level of funding, but aims to grow its footprint. “We want not just to fund, but also to expand it. Our goal is to have a million young people serving every year within a generation,” she said.

This T-Rexification trend, which has cropped up in many other contexts and has trampled the pages of Facebook and other social media platforms, is in fact a welcome phenomenon. It seems that with President Trump’s rise to power and the precipitous brand of callous politics that has plagued federal, state, and local governments in recent years, we have seen many dinosaurs masquerading as people in the halls of Congress and lesser state houses. But with the AmeriCorps drive, it’s good to see more of them coming over from the dark side.—Louis Altman