Ice Buckets and the Psychology of Giving 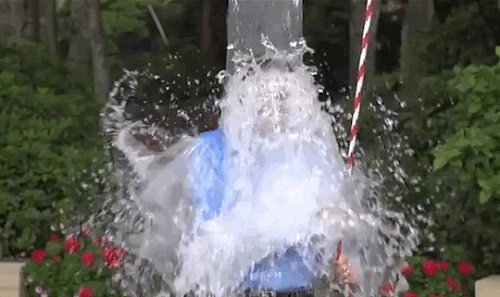 The end of the calendar year is traditionally seen as a time when people are feeling generous and are making donations to charities. What better time, then, to ask why people respond to some giving mechanisms, such as the recently omnipresent ice-bucket challenge, but not to others. A recent op-ed piece in the New York Times by Ian McGugan asks this very question.

According to the article, researchers are fairly convinced that in many cases we like to give for very selfish reasons, and this may have fed the ice-bucket brigade. For example, we may wish to give to have our names on a list, thereby enhancing our reputation, or to keep up with others in the community who are giving. In the case of the ice-bucketers, the sense is that people were feeding their own narcissism: People could post photos and videos of themselves in highly visible arenas like Twitter and Facebook.

One interesting theory behind group events that benefit charities describes what has been called the “martyrdom effect.” Dousing yourself with very cold water probably does not feel very good—this writer has not tried it and so cannot speak from personal experience—but a lot of people did it. Marathons and bike-a-thons encourage people to test their endurance travelling many miles. Hundreds of people do it, all in the name of a good cause. But why aren’t there regular “dessert-a-thons,” for example? These experiences, according to one researcher, become more meaningful to us “if blood, sweat, and tears are involved.” We feel we have to experience a little pain or discomfort in the process of being generous—and it’s best if what we have to endure is tied thematically to the cause in question.

“It would not work to have Girl Scouts roll in broken glass to raise money,” said Christopher Olivola of Carnegie Mellon University, who co-wrote the paper on the subject, “and it wouldn’t work to use the ice-bucket challenge to raise money for opera.”

An experiment from 2011 found researchers using the Salvation Army year-end fundraising at a store in Boston to explore people’s reactions to being asked for money. Sometimes, the three researchers would simply ring their bells. At other times, they would make eye contact with shoppers and ask them directly to give. When they were simply ringing the bell, shoppers went about their business as per normal. But when eye contact was made, shoppers would look for ways to avoid the bell-ringers and find other entrances to the store. Even more interesting is that when they asked people for money, the researchers raised 60 percent more than when they simply rang their bells even though the shoppers worked hard to avoid them. We hate to be asked, the researchers found, but we are generous when we are.

Despite the ice-bucket challenge’s popularity and the plethora of new ways to give, Americans are still giving at only about two percent of their incomes. These increasingly ingenious challenges that are popping up are responses to the need to work harder and harder for a slice of a pie that is not getting bigger. The ice-bucket challenge broke through our general distaste for being asked; the exact reasons why are still unclear.—Rob Meiksins