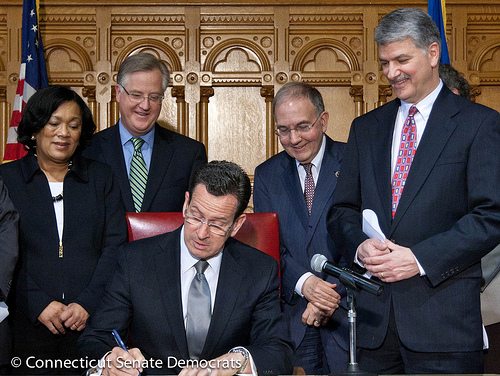 New Haven recently got its first look at Gov. Dannel Malloy’s (D-Conn.) proposed two-year state budget for the fiscal years of 2014 and 2015. The governor appears proud that the budget is balanced, adds no new taxes, and increases spending in education. The budget, he says, also holds municipalities harmless, ensuring that “no municipality receives less total funding than in the prior year, and most will receive more.”

Would New Haven be held harmless, or is this a sleight of hand? Some New Haven officials do not seem convinced, indicating their impression that the city would lose important sources of funding that they have long counted on. In particular, the proposed state budget wipes out a program in which the state compensated cities with significant amounts of tax-exempt property, refunding them for some of the taxes they may have hypothetically collected had the properties been taxable. As home to Yale University, New Haven has one very big and wealthy tax-exempt property owner in addition to the usual tax-exempt facilities that center in cities, including state government facilities. The elimination of the state’s Program in Lieu of Taxes would take $4.7 million from New Haven.

The state contends that the budget makes up for these lost funds with other funding lines in the budget—for example, through an education cost sharing grant and through money from the Local Capital Improvement Program. New Haven Mayor John DeStefano doesn’t buy it. To him and to alderman on the New Haven City Council, these are simply cuts in state aid to cities. The difference between the sources New Haven says it is losing and the funds it is getting as replacement dollars is that the lost sources go into the general fund as unrestricted moneys, but the replacement dollars are restricted to specific purposes.

Using a reference to Alice in Wonderland, DeStefano cited several things he finds impossible to believe about the state budget, including notions that the budget won’t force cities to raise property taxes and that killing the state PILOT program is good for cities. Despite the presence of Yale, New Haven is actually a poor city. In Connecticut, only Hartford surpasses it in terms of poverty.

So, here’s the situation in a nutshell: despite a new nonprofit infrastructure bond, many crucial nonprofit programs are being cut. Despite state funds purportedly making up for cuts in state aid, the general funds of cities like New Haven will take significant hits. What would nonprofits say to Gov. Malloy as they stand next to Mayor DeStefano and argue for restructured sources of municipal government finance?—Rick Cohen