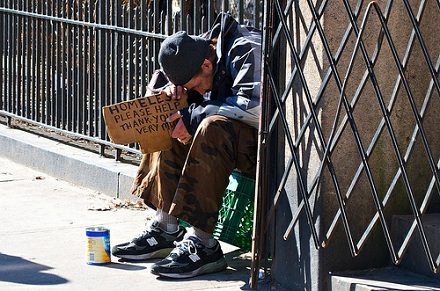 In contrast to cities and states that have been trying to sweep the homeless out of sight by criminalizing aspects of homeless activity (like strengthened laws against loitering and asking for change), Rhode Island is taking the “high road,” according to Mother Jones reporter Erika Eichelberger.

The Rhode Island State Assembly has just passed the first Homeless Bill of Rights in the U.S. We looked at the text of the bill, which we assume is pretty much the same as the legislation that will be presented to Gov. Lincoln Chafee next week. The purpose of the law is that, “(N)o person should suffer unnecessarily or be subject to unfair discrimination based on his or her homeless status. It is the intent of this [law]…to ameliorate the adverse effects visited upon individuals and our communities when the state’s residents lack a home.” The bill contains the following provisions, among others, which are worth quoting at some length to see if this bill might be a model for other states:

Should there be a right to shelter—that is, a right afforded to everyone of a decent, safe home? We don’t think the Rhode Island homeless bill of rights guarantee the homeless the right to shelter or, even better, the right to a home to cure their homelessness. Still, this is a new development in civil rights. The National Law Center on Homelessness and Poverty believes that this is the first time a state has made “unequal treatment based on housing status…a form of discrimination, which will allow enforcement through litigation.” So one state in this nation’s increasingly federalized system has made discrimination against the homeless based on their lack of a home a violation of civil rights. How quickly will other states pick up this tack? Or does it need a federal standard, rather than subjecting the homeless to various levels of state-by-state acceptance and enforcement?—Rick Cohen