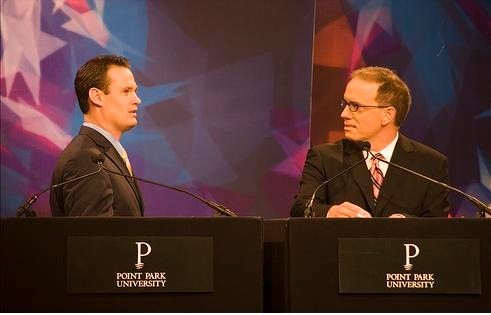 The epicenter of municipal efforts to tax nonprofit property owners is still rumbling. Last week, we reported on the announcement of Pittsburgh mayor Luke Ravenstahl’s plans to challenge the tax status of the nonprofit University of Pittsburgh Medical Center (UPMC), which came under fire for circumventing the city’s request for a payment in lieu of taxes (PILOT) by making contributions to the Pittsburgh Promise scholarship fund. Nonprofits don’t seem to have found the mayor’s idea positive or constructive. Don Smith, the president of the Regional Industrial Development Corporation (RIDC), declared that the city’s lawsuit has “dramatically complicated the issue” and left “the spirit of openness and collaboration … wounded.”

He made these comments to the Intergovernmental Cooperation Authority (ICA), a state-created entity created in 2004 by then-governor Ed Rendell to find solutions to Pittsburgh’s troubled municipal finances and provide fiscal oversight. Last October, the ICA approved the city’s tenuous budget, but made one of its requirements the creation of a nonprofit task force, which is chaired by Smith. It met for the first and only time under Ravenstahl just this past January. The purpose of the task force, according to the ICA, was “to review, study, benchmark, develop and submit a written proposal to the City and the ICA regarding the level, length and form of support from the nonprofit sector.” It would seem that Mayor Ravenstahl’s litigation pre-empts the nonprofit task force report.

Maybe the mayor doesn’t think a 41-member task force is going to generate much of a product, but his suit is a bit of a slap in the group’s collective face. Among the task force members are Aradhna Oliphant, CEO of Leadership Pittsburgh (and spouse of Grant Oliphant, president and CEO of the Pittsburgh Foundation); Robert Vagt, president of the Heinz Endowments; Barbara Taylor, executive director of Grantmakers of Western Pennsylvania; Renny Clark, the University of Pittsburgh vice chancellor for community initiatives who represents the Pittsburgh Public Service Fund (the consortium of nonprofits that makes a joint payment to the city under a negotiated agreement); and Robert Kennedy of UPMC itself.

So what’s behind the mayor’s action so soon after the ICA-created nonprofit task force met to start work on a new nonprofit payment plan? Remember that the Pittsburgh Public Service Fund (PPSF) agreement with the city, currently a $2.6 million contribution annually, expires this year. Ravenstahl has announced he isn’t running for reelection and will leave office in 10 months, so he won’t even be in office when the results of his lawsuit and the nonprofit task force take effect. Moreover, Ravenstahl is suing UPMC, but not challenging the tax status of any other nonprofit property owner.

The mayor’s unilateral lawsuit is actually a snub not just to the nonprofit task force, but to the state’s financial oversight body itself. The lawsuit against UPMC is tantamount to saying that no matter the processes and structures designed for amicable negotiations between the city and the nonprofit sector, Mayor Ravenstahl is going to go his own way, even as he marches out of City Hall to whatever his next job might be. Regardless of what one thinks about the degree of UPMC’s “nonprofitness” or about its singular deal, outside the structure of the PPSF, to contribute to the Pittsburgh Promise program and avoid a PILOT payment to the city, the mayor’s actions seem entirely counterproductive and self-involved, perhaps constituting a political statement of some sort he wants to make about nonprofits or nonprofit hospitals more specifically, but not likely to be a positive step for the city of Pittsburgh and its important, vibrant nonprofit sector.—Rick Cohen