Increases in Charitable Giving Projected, But Where Will That Money Land? 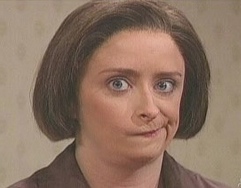 I realize that some experience me as something of a “Debbie Downer” about the post-recession recovery in charitable giving. But, as with the larger economy, will the fruits of this recovery go primarily to the top three percent of nonprofits?

A new report from the Lilly School of Philanthropy projects a healthy increase in giving over 2015 and 2016, and the increases, if they occur, are nothing to sneeze at on the surface. But NPQ cautions our readers not to count their chickens before they are firmly in the henhouse.

The report is entitled “The Philanthropy Outlook,” and before we go into the details of its findings, it is worth noting that this is a new annual publication from the Lilly Family School of Philanthropy at IUPUI and Marts & Lundy. Its principal investigator, Una Osili, says that they plan to add to it over the next few years, so while now it only deals with projections about gifts and their sources, in upcoming reports they may also project where the gifts are likely to go and through what donor vehicles (online, donor-advised funds, and so on). 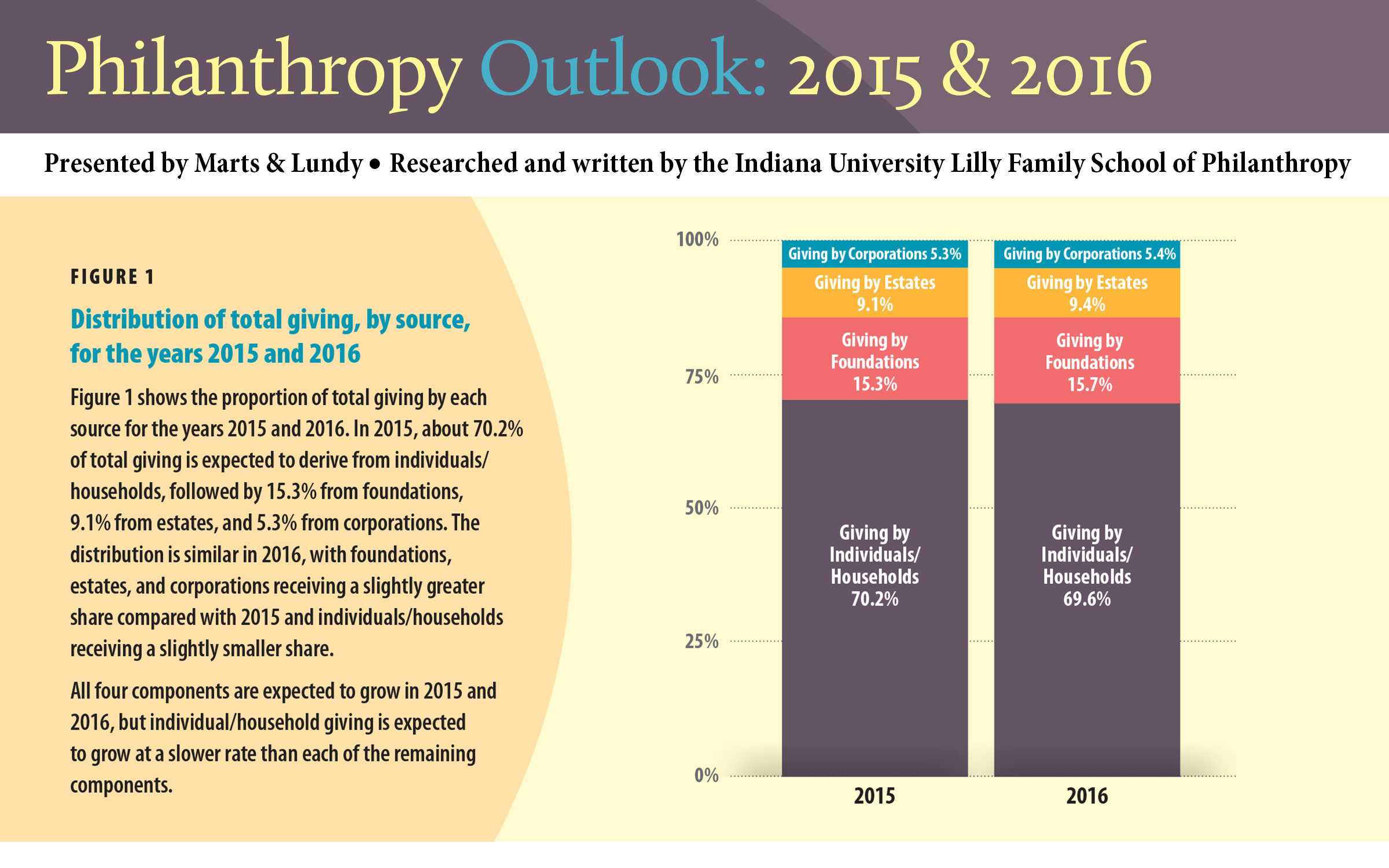 A nice healthy increase…or so it seems until you look at the rate of growth over the decade between 2005 and 2015. Because of the declines in giving experienced during the recession, the gains we will have experienced in that entire decade amount to 0.8%—against, for instance, 8.5% in the decade prior. 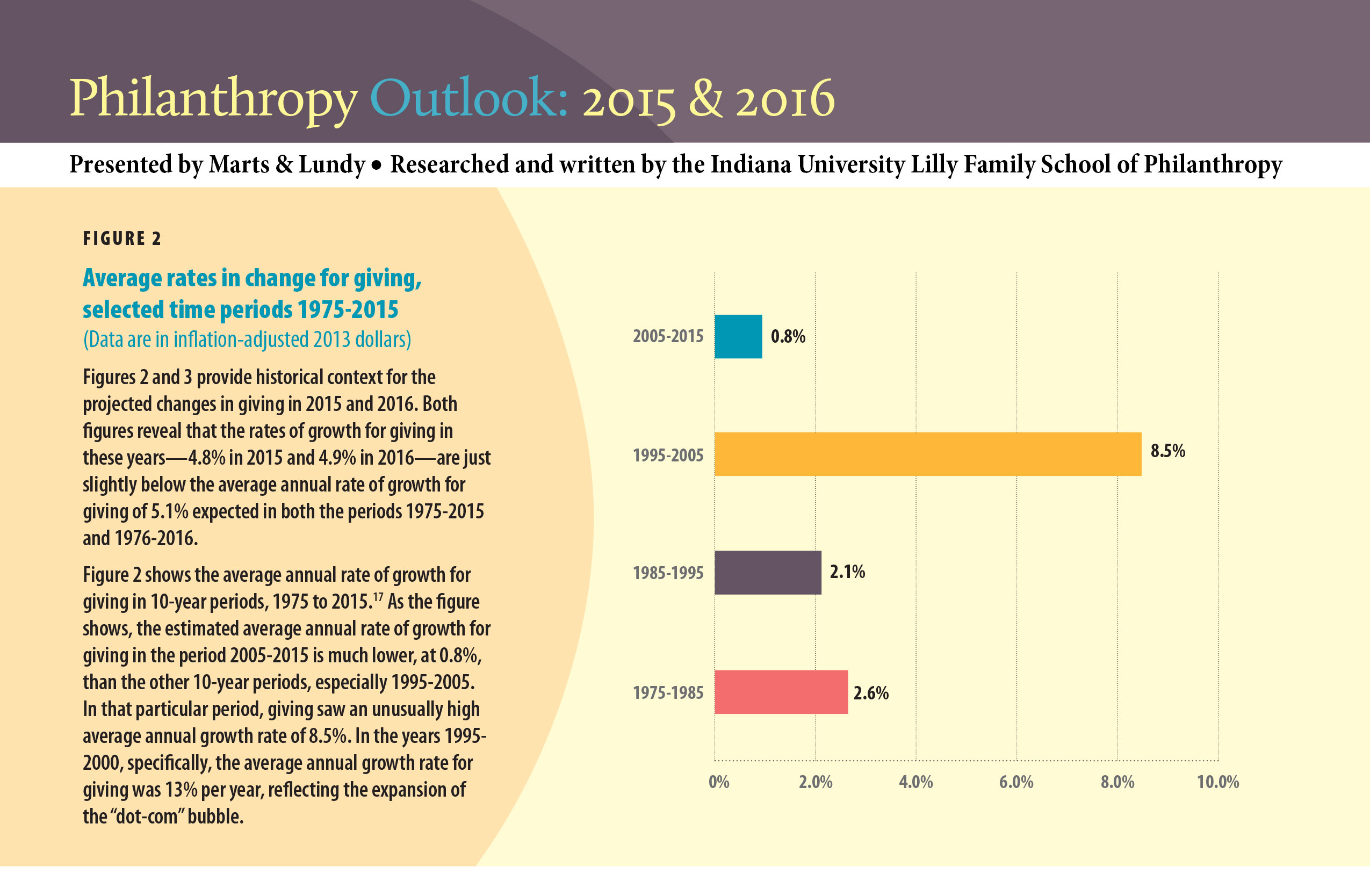 Between 2006 and 2016, if the projected gains are realized, growth will be 1.5% against 6.6% in the previous decade. In other words, minimal growth—lower than in any of the four decades measured above.

Additionally, the report bases its projections in the category of giving by individuals and households, which is as always the largest source group, on the rise in personal incomes and above-average growth in household net worth. But we know in fact that gains in personal income have been wildly lopsided, with stagnant wages for most Americans and the lion’s share of the fruit of the recovery going to the very rich. The following further supports the assumption that much of the increase in giving will be done by those with lots of resources:

Itemized giving, which will be growing at a higher rate than non-itemized, is done by the top 20% of wealth holders, to the tune of around $40 billion a year out of our collective tax base. And the rich generally give to organizations they know well—often large, and already well heeled. Unless your organization fits in that elite category, you’re not likely to benefit.

It never makes much sense to focus on the amount being contributed without watching to whom it is being given—not if we are really interested in the health of our communities. For instance, here is a small morals test for you: Do you feel happy or sad about this?

“Greater positive growth in giving by corporations for the years 2015 and 2016 will be offset by slight growth in employment rates in preceding years. As the number of employees rise, companies will have to pay out overall greater amounts to their growing payrolls. As a result, companies may scale back on their philanthropy.”

So I guess that we might suggest that you not get overexcited. It is very likely that the philanthropic economy of the next few years will mirror the increasing wealth gap in the overall economy—so let’s get busy and change that larger context!