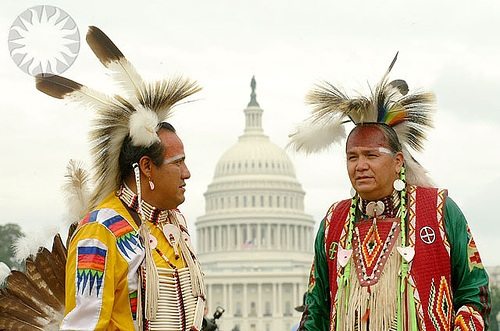 Some tribes may have casino revenues to borrow against or some other assets banked away, but many tribes don’t, and are largely dependent on their relationship with the federal government. For example, with the government shutdown, the Yurok tribe of northern California cut childcare for 50 children and tutoring for 1,900 children, along with furloughing 60 of the tribe’s 310 employees upon the announcement of the federal shutdown. In some cases, the tribes cannot get access to their own assets, as in Montana, where the Crow tribe had to furlough 380 employees because it couldn’t get access to the royalties it earns from a coal mine it owns, because the federal government manages the profits from the mine. According to Ron Allen, the chairman of the Jamestown S’Klallam Tribe in Washington State, the shutdown will be particularly hard for about half of the tribes that don’t have gaming or other resources: “So many of us—the majority—of tribes are dependent on federal resources,” he said. “It’s going to be tough for the tribes.”

The story varies by tribe, depending on how programs and personnel are classified. In Arizona, the nation’s largest tribe, the Navajos, haven’t had to furlough staff as of last week, partly because of the classification of many of its 7,000 tribal government employees as essential, and partially because some of its operations are on a different funding cycle than the federal government’s fiscal year. But the longer the shutdown goes, the more even the Navajos will feel its brunt. Even though the U.S. Bureau of Indian Affairs (in the Department of the Interior) is on skeleton staffing, law enforcement, firefighting, and Indian Health Service hospitals and clinics will stay open, having been deemed essential, but nutrition programs, foster care payments, and financial assistance to the poor on reservations are jeopardized, frozen, or shut down at the moment. As Dan Frosch points out in the New York Times, suspending programs due to the shutdown is fundamentally another layer of hardship on the tribes that have already had federally subsidized programs cut back due to the sequester.

This week, the 70th annual meeting of the National Congress of American Indians is being held in Tulsa, Oklahoma. At the NCAI conference, one suspects that some discussion might be devoted to what the federal government ought to be delivering to Native Americans, as distinct from the government’s obligations to other population groups within the boundaries of the U.S.

Although the U.S. was one of only four countries to vote against the United Nations Declaration on the Rights of Indigenous Peoples in 2007, it subsequently changed its position and endorsed the non-binding agreement. What does it mean to be a nation of indigenous people within the boundaries of the U.S.? Are Native Americans just one more minority group for the government to assist or not, depending on the availability of federal revenues in budget negotiations? Or, as indigenous people—“First Americans,” as many call them—do they merit a different kind of treatment, under color of treaty obligations between the sovereign U.S. government and sovereign tribal nations?—Rick Cohen