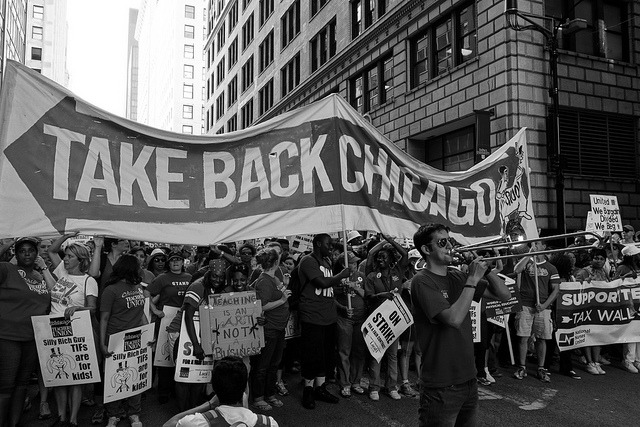 Public education in Chicago generates lots of news, given Mayor Rahm Emanuel’s practice of closing public schools, opening charter schools, and threatening (through his current head of the Chicago Public Schools) either pay cuts or layoffs for Chicago teachers. The previous head of Chicago Public Schools, an Emanuel appointee, was Barbara Byrd-Bennett, who was the subject of a federal indictment for bribery announced just last week.

The Chicago Reader’s Ben Joravsky summarizes elements of the indictment that identified Byrd-Bennett as a paid consultant for a firm called SUPES Academy (with an affiliate called Synesi Associates) prior to taking the helm of CPS. At CPS, Byrd-Bennett allegedly steered more than $23 million in no-bid CPS contracts to SUPES “in exchange for an expectation of hundreds of thousands of dollars in bribes and kickbacks,” according to the indictment. The kickback money went to accounts in the names of Byrd-Bennett’s relatives, but a later modification to the scheme had the kickback funds structured to be paid to Byrd-Bennett directly as a “signing bonus” on her return to employment at SUPES after leaving CPS.

The brazenness of the scheme is reflected in this quote from an email from the SUPES/Synesi execs to Byrd-Bennett:

Like we have discussed, we have created accounts that, upon withdrawal, we will pay down the taxes and distribute. You can distribute to [Relative A and Relative B] as you deem appropriate. It is our assumption that the distribution will serve as a signing bonus upon your return to SUPES/Synesi. If you only join for the day, you will be the highest paid person on the planet for that day. Regardless, it will be paid out on day one.

It’s not like Byrd-Bennett did much to camouflage her scheme. At one point, she emailed SUPES owner Gary Solomon that she needed the money because she had “tuition to pay and casinos to visit.” According to the Chicago Tribune, Solomon has been a longtime advisor and consultant to Mayor Emanuel himself. Having been caught with her hand scraping the bottom of the cookie jar for remaining crumbs, Byrd-Bennett appears to be about to plead guilty, and Solomon may do the same. Both are reportedly cooperating with investigators.

Nonprofits are not mentioned in the indictment, but it is difficult to imagine that there won’t be some nonprofit dimensions given Emanuel’s CPS strategy, which leans toward privatization. NPQ’s Marty Levine noted earlier this year that the investigation of SUPES also led to a federal subpoena for records from the Chicago Public Education Fund, which in 2011 made a $380,000 grant to SUPES for a pilot program of training for “CPS network chiefs and their deputies.” Now that SUPES has morphed from investigation target to indicted co-conspirator, the CPEF seed grant to SUPES takes on a new role, given Solomon’s connection with both Byrd-Bennett and the mayor himself. Among the CPEF board members are Governor Bruce Rauner, U.S. Secretary of Commerce Penny Pritzker, Barbara Malott Kizziah of the Malott Family Foundation, Helen Zell of the Zell Family Foundation, and Elizabeth Swanson of the Joyce Foundation, along with a host of bankers, investors, and others. Swanson was chief of staff for education under Emanuel before joining Joyce, the Zell Family Foundation is the philanthropic arm of billionaire real estate developer Sam Zell who is close to the Mayor and a funder of his PAC, and the Malott family is widely connected to many mainstream Chicago institutions.

The CPEF board overall is loaded with pro-charter advocates as well as people who have been strongly allied to—if not employed by—Teach for America in addition to the money people. It should be no surprise to learn, as Solomon nears his date with federal justice destiny, that the new owner of SUPES is one Joseph Wise. Remarking that he acquired the “best aspects” of SUPES Academy, Wise owns a company called Acceleration Academies, which, Mike Klonsky reports in the Schooling in the Ownership Society blog, is hoping to open eight alternative school campuses in Chicago and is working with Distinctive Schools, a charter school management company whose board he chairs. According to Klonsky, SUPES has been renamed the National Superintendents Academy, officially owned by a firm called Atlantic Research Partners, established in 2007 by Wise and one of his Acceleration partners.

To be fair to Byrd-Bennett, her relationship with SUPES was well disclosed before the CPS awarded the eight-figure no-bid work; it was on her resume, front page. In fact, prior to joining CPS, she was also a senior advisor at a school turnaround organization called Catapult Learning, which also, like SUPES, landed a CPS contract during her tenure as Chicago’s education CEO, though there is no indication in the indictment at Catapult was part of the federal inquiry.

Given, however, her audacious financial dealings with SUPES while she was steering CPS, one ponders whether the various nonprofits she has served as president or board member have to wonder now what kind of due diligence and standards Byrd-Bennett might or might not have deployed as a member of their governing bodies. From her days in Cleveland when she was in charge of the Cleveland public schools, Byrd-Bennett was president of the Barbara Byrd-Bennett Foundation for Cleveland’s Children, which had its 501(c)(3) status revoked by the IRS in 2011 for failing to submit 990s (the last one we could find was from 2005), but she also served as a vice president of the Charter School Achieve-Board Prep Academy in Washington, D.C.; a member of the executive committee of the National Center for Education Accountability; and a board member of nonprofits such as the National Board for Professional Teaching Standards, the Albert Shanker Institute, the Cleveland United Way, and the Rock and Roll Hall of Fame.

GuideStar also shows her as a board member of New Schools for Chicago, described on GuideStar as a venture philanthropy organization aiming to create 100 new public “schools of choice” with funding from the Gates Foundation and the Walton Family Foundation, among others; the Council of Great City Schools; Common Core Inc.; Junior Achievement of Chicago; the MEH Education Corporation, which is focused on helping states use best practices in education accountability, though MEH had its (c)(3) revoked in 2011; and the Hawken School, a private day school with tuition/fee levels ranging from $19,195 for kindergarten children to $30,745 for 12th graders.

The indictment and the in-process guilty plea paint a picture of Byrd-Bennett generously rewarding herself and her business associates from the assets of a public school district that is in financially disastrous shape. The irony of her service on nonprofit boards dedicated to school accountability and educational standards is obvious, but there is an additional troubling issue. If she was well along the road to financial perfidy in Chicago, the nonprofits that had her as a board member or officer ought to closely re-examine her role in their operations and governance and rethinking whatever advice she might have offered. As a respected senior official in two big city school systems, she wasn’t just stealing lunch money but helping herself and her associates to major sums to help her pay for kids’ tuition, her own casino expenses, and much more.

Somehow, the Byrd-Bennett picture doesn’t seem like the 2015 indictment was entirely a surprise. The multiple nested relationships among Byrd-Bennett’s nonprofit, public, and for-profit identities should have been a clue. For the nonprofits associated with Byrd-Bennett’s barefaced corruption, it is a time to question their anti-corruption antennae and due diligence.—Rick Cohen