This article from the fall 2020 edition of the Nonprofit Quarterly introduces a series of works on the subject of environmental justice and Indigenous communities in the United States, curated by Raymond Foxworth of the First Nations Development Institute. Look for more articles in this series, and watch this exclusive webinar on the topic featuring three of the authors, hosted by Senior Editor Steve Dubb.

Economists Shawn Regan and Terry Anderson have noted that Native communities, especially in the Western United States, are “islands of poverty in a sea of wealth.”4 Some economists have suggested that Native nations exploit these resources for economic gain, to lift themselves out of poverty and enable local community development. In fact, federal policy-makers and extractive industry lobbying groups have long advocated for reducing barriers for Native nations and people to lease these valuable resources to mostly non-Native companies for exploitation and development. Historically, Congress and their extractive industry allies sought to exploit Native lands and resources without Tribal input and consultation or by diminishing Tribal lands.5  Deals surrounding non-Native access and use of Native lands and resources were the subject of one of the largest settlement cases involving mismanagement and neglect of Native lands and interests by the federal government.6

But today, as highlighted by the expert contributors to this issue, Native nations are reversing histories of exploitation by the federal government and other accomplices. Native nations and Native organizations are actively fighting for the protection of local resources. Moreover, the leaders at the helm of this special issue all highlight place-based efforts to advance Indigenous environmental justice, rooted in Indigenous knowledge and epistemologies. These authors make clear that U.S. settler-colonialism continues to be a driving force behind the deterioration and contamination of Native lands, but also that Indigenous peoples are not subjugated, passive victims of “modernity” but rather are taking active stances to fight for justice. Finally, all the authors make clear that for modern environmental and climate justice movements—and philanthropic support of these movements—to be truly impactful, they must let Indigenous peoples lead.

Historically, environmental movements have not been an ally to Indigenous peoples and communities. For example, the early conservation movement in the United States lobbied to create the national park system that displaced and expelled Native peoples from their homelands and hunting grounds, in an effort to keep these lands in a pristine “state of nature.” Originating with Yosemite National Park in the Sierra Nevada mountains around the 1850s (during the California Gold Rush), conservationists were backed with the full might of the U.S. Army to push Native peoples from lands that they had occupied for thousands of years. Seen as a model for successful land and natural resource protection, this system has been exported around the world.7

But Indigenous people have critically important knowledge systems and practices. For example, as fire archaeologist Hillary Renick has noted, wildfires across the globe have been linked to changes in climate that have created warmer, drier conditions, and increased droughts; and there is growing recognition that traditional Indigenous land practices prevent forest fires. Calls for the integration of Indigenous traditional fire ecology into mainstream land management practices are also growing.9

Beyond their colonial and racist origins, and inability to acknowledge that traditional Indigenous knowledge can advance climate and environmental justice, the modern climate and environmental movements perpetuate Indigenous marginalization and exclusion in terms of their composition. Environmental organizations in the United States largely remain segregated; the most recent and publicly available data note that 80 percent of boards of directors and 85 percent of staff of environmental nonprofits are white. These organizations not only lack diversity but have also become less and less transparent in their reporting of staff and board compositions.10  At the same time, funders have done relatively little to meaningfully push the environmental and climate justice movements to be more diverse and inclusive, in large part because they are also rooted in whiteness.11

Philanthropy and the Funding of Indigenous Environmental Movements12

Despite the long history of Native resistance to exploitive and harmful forms of energy and resource development, philanthropic investment in Native environmental justice movements mirrors their overall marginal investments in Native communities.13

According to data made available by two nonprofits, Candid and Native Americans in Philanthropy, foundations awarded 1,166 grants totaling roughly $60 million between 2014 and 2019 to Native American environmental and animal organizations and causes. On average, foundations award roughly 194 grants totaling about $10 million annually to these organizations and causes (an average grant size of $51,450).14

The top two high years of foundation giving (2015 and 2016) do coincide with large and very public events in Native communities. It was in 2016 that Water Protectors gripped national headlines as they mobilized to protect land and water on the Standing Rock Reservation in North Dakota, fighting against the Dakota Access Pipeline.17 Also starting in 2015, Native nations and organizations were at the peak of their organizing, advocating to get Bears Ears in southern Utah designated as a national monument.18

The vast majority of funding provided by foundations for the past five years has been in the natural resource subject area, as identified by Candid. This includes work targeting energy resources, water and water management, air quality, and more. The second highest subject area of support is biodiversity, including forest preservation, plant biodiversity, and wildlife biodiversity. 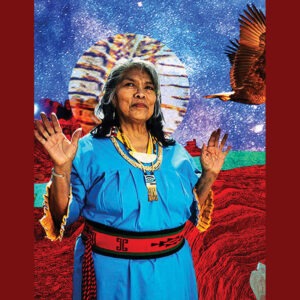