Is the Vatican Recognizing LGBT Equality through Renaissance Art? 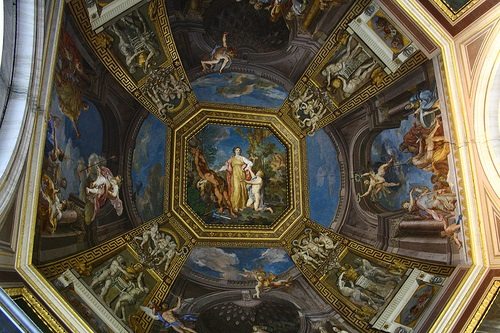 Since the beginning of his reign, Pope Francis has been somewhat different from his predecessors. For one, he got the job after Pope Benedict XVI voluntarily stepped down from the position, the first to do so since the early 1400s. And while we may now know about the papal power grabs that have taken place for centuries behind closed doors, we can see firsthand Pope Francis has charm and knows how to use it.

What perhaps makes him even more charming is his softening, if not undefined, opinion of same-sex marriage. At the same time, the Vatican may also be opening up and acknowledging for the first time the not-so-subtle homosexuality present in the famous frescos adorning the walls of the historic Sistine Chapel, the principal watering hole for the High Renaissance, among other places in Vatican City.

Quiiky, an LGBT-friendly travel group, is taking advantage of Pope Francis’s open-mindedness and orienting their guided tours through Vatican City around discussion of the masterpieces of Leonardo di Vinci and Michelangelo as seen through a gay lens—a lens through which they are often studied by art historians, given that the artists were gay. Church scholars have long denied these relations, even in the face of ample evidence that both artists were known to have had relationships with men.

“[Visitors] discover new ways to look at [the] paintings and sculptures they [are] supposed to know well,” said the group’s CEO, Alessio Virgili. “Intelligent people like to look at the world from a new point of view. It is not [just] a question of homosexuality.”

Indeed, in celebrating the work of these gay artists who created some of the most important art of their time and ours, Virgili also believes the tours may help young gay boys or men accept themselves.

It is important to note that while Pope Francis has toed the line on same-sex couples, the Church has not come out and explicitly stated any formal change of their opinion of same-sex unions. In fact, they seemed to reaffirm their position only days ago. The Vatican has not shown any support for the tours either.

The Church has certainly had a difficult history with homosexuality, and continues to do so. In an issue of Vanity Fair last year, writer Michael Joseph Gross identified cardinals, monks, and clergymen living in Rome with secret gay alternate lives. While popes in the past have notoriously been levied with allegations of adultery, some have also been accused of being homosexual, like John XII (955-964), Boniface VIII (1924-1303), and Paul II (1464-1471) and his successor, Sixtus IV (1471-1484). But nowhere is this thinly veiled relationship more evident than in the artwork of these great masters, a reflection of their own sins.

“Michelangelo’s nudes are about a lot more than sex. But they make no sense without it,” says Jonathan Jones for the Guardian. “Of course they express his passion for male bodies; he left written evidence to confirm it.”

The nudity that features in pretty much all of Michelangelo’s work on the ceiling of the Sistine Chapel, even in images depicting religious scenes, seems contrary to an environment that serves as the venue for papal elections and as the official residence of the Pope. While some of the most egregious nudes on Michelangelo’s frescos and statues were censored following his death, the question of why any of it is there at all still remains. In accepting Michelangelo’s genius, have they been rejecting the meaning of his frescos?

As noted by Jones in his article, Michelangelo followed the neoplatonists concept of love, which sees love as a means to bring oneself closer to God. His writing and his art were expressions of that belief. It would seem an awful shame that the very images that expressed both Michelangelo’s love for man and God would be denounced and rejected while his art was still celebrated. Perhaps with these subtly changes in minds and attitudes, we will one day see not only the acceptance of LGBT equality, but also the slow acceptance of these artists’ true selves.—Shafaq Hasan