James “Not a ‘Conventional’ Racist” Watson Auctioning off His Nobel Prize 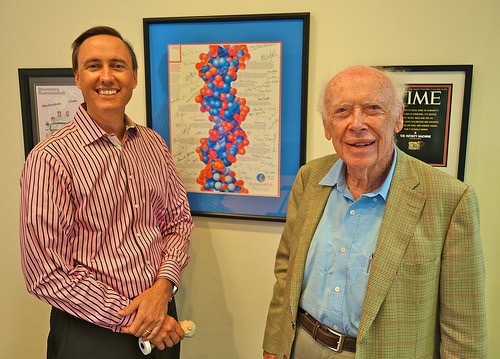 Formerly hugely self-satisfied, now self-pitying, James Watson won the Nobel Prize with two other scientists in 1953 “for…discoveries concerning the molecular structure of nucleic acids and its significance for information transfer in living material.” In other words, for his work on DNA. Watson has now, in a history making move, declared that he is auctioning off his prize medallion, hoping to raise somewhere between $2 and $3.5 million.

Watson says he is doing it partly because he needs the money, as he has become a self-described “unperson” due to off-the-cuff remarks he has made over the years, but he may also give some of the proceeds to charity. But any charity should think twice before taking his money, because not only has Watson made some appalling public remarks over the years, but he also seems to have gained very little self-control with age. Indeed, Laura Helmuth, Science and Health Editor at Slate, acknowledges Watson as one of the most important scientists of last century, but she also calls him a “peevish bigot” and “a jerk.”

Helmuth writes that Watson has “been making racist and sexist remarks throughout his career, but he really outdid himself seven years ago when he told the Sunday Timesthat he was “inherently gloomy about the prospect of Africa” because “all our social policies are based on the fact that their intelligence is the same as ours—whereas all the testing says not really.” He further said that while we may wish intelligence to be equal across races, “people who have to deal with black employees find this not true.”

Helmuth goes on to say that overt racism was joined hand in hand with dismissive sexism in Watson’s repertoire. She writes that he did not cite in his work the research of fellow scientist Rosalind Franklin, without which he and Francis Crick would not have been first out of the gate with the double helix structure. Subsequently, in his memoir “he called Franklin ‘Rosy’ (not a nickname she used), critiques her clothing and makeup, and characterizes her incorrectly as another scientist’s assistant.” At a scientific conference in 2007, he quipped “I think having all these women around makes it more fun for the men but they’re probably less effective.”

Then there was the incident in Berkeley in 2000, wherein Watson told an audience that sunlight exposure and libido were linked, resulting in “Latin lovers.” Oh, and at that point, he is also reported to have discussed the question of fat vs. thin: “Whenever you interview fat people,” Watson said, “you feel bad, because you know you’re not going to hire them.”

“The auction of Watson’s Nobel Prize, a recognition of one of the biggest triumphs in the history of science, has presumably been in the works for a long time. Watson told the Financial Times that selling it is a way to “re-enter public life,” and he “insisted he was ‘not a racist in a conventional way,’” according to FT. Watson couldn’t have known that the auction would be announced while people all over the country are protesting police brutality against blacks—people too many police officers see as subhuman. But these protests are a reminder that racist ignorance is pervasive and dangerous, and that Jim Watson’s bid for attention isn’t just about him tarnishing his own legacy.”

So you may wish to polish up those gift acceptance policies, and as mentioned above, if you get a gift check in the mail from this guy, consider the reputational risk.—Ruth McCambridge