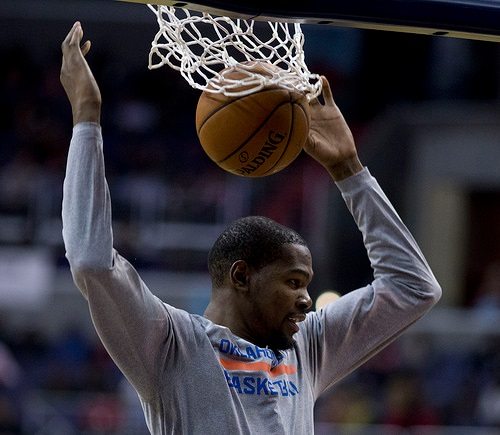 There must be some way to explain the birthday party that Nike threw for NBA all-star Kevin Durant. The theme of the party was the racially derogatory nickname and caricatures of the Washington D.C. NFL franchise owned by Daniel Snyder. Perhaps it is because Durant is from Washington, D.C. Perhaps it is because Snyder has shown personal interest in Durant, including giving Durant a special football from the team’s 41-to-10 victory over the Jacksonville Jaguars. Accompanying Durant’s birthday cake, in the shape of a basketball court, was a jersey from the football team. Washington, D.C. is a football-mad town, so perhaps hosting a birthday party in Beaverton highlighting Durant’s hometown football team had special meaning for him.

Durant didn’t seem to protest the use of the Washington team’s racial slur as the theme of his birthday party, but a group called Eradicating Offensive Native Mascotry was disturbed.

“It is more important than ever that Nike demonstrate support for Native American families, particularly after Nike’s insulting racial slur themed birthday party last week for National Basketball Association player Kevin Durant,” EONM said in a news release. “Nike Inc. has demonstrated that part of what they want Native American families to do is trade in their identity for inclusion because they want to sell a culturally marketable shoe or other merchandise to Native Americans and yet, still sell ‘Chief Wahoo,’ Tomahawk chop, FSU, Chiefs, and Washington team gear for profit as well.”

In 2013, in a Nike press release (probably connected because of Durant’s marketing contract with Nike’s Under Armour products), Durant endorsed N7:

“Playing in Oklahoma City has connected me to the mission of Nike N7 and the meaningful impact that it has with Native Americans here and across North America. I believe in the power of sport to change lives, and I support helping youth in Native American communities experience the positive benefits of being physically active.”

EONM doesn’t find Nike’s N7 program to be all that valuable: “We may be consumers, but our culture has been a mass marketing commodity for far too long and is an exploitation that is doing measurable harm to the self worth of Native children. Nike must support Native Americans speaking out about Native Mascotry in sports; otherwise it looks like all the good N7 is wanting to do is more about bribery than empowerment. That form of bribery is nothing new and looks much like Dan Snyder’s Original Americans Foundation.”

Nike responded with a press release highlighting its commitment to diversity: “Nike has a long history of supporting the Native American community and we encourage the teams and leagues to engage in constructive dialogue with their communities.” The company also said, regarding its marketing of the horribly racist “Chief Wahoo” caricature used by the Cleveland Indians, that “Nike has a contractual partnership with Major League Baseball as the licensing agent for MLB team-approved marks…Each MLB team is responsible for choosing their team logos and marks and we understand that the Cleveland Indians are engaging their fans and the local community in conversation concerning their logo.”

When Los Angeles Clippers owner Donald Sterling unleashed some racial invective in a conversation with his girlfriend, NBA players stood up just about in unison against the long-time racist. While the owner of the Washington NFL team promotes a racial epithet as his team’s nickname or when the Cleveland Indians employ a cartoonish Native American character as their emblem, major league professionals have been sadly silent. To see Nike joining the fray by using the Washington team’s name as a party theme while pitching the N7 fund as a philanthropic response, it looks all too much like Dan Snyder’s Original Americans Foundation. Philanthropic support from Nike or Snyder doesn’t erase the incalculable damage caused by the use of derogatory racial mascots and names by pro teams and the corporations that engage them and their players in marketing schemes.—Rick Cohen