“Civic leaders and funders are increasingly exploring the potential for technology to promote healthy, vibrant communities. Though activity and investment in civic tech has grown over time, a lack of insights and common terminology for describing the full spectrum of efforts in the space has hindered collaboration around shared strategies for impact.”

The John S. and James L. Knight Foundation today released “The Emergence of Civic Tech: Investments in a Growing Field,” an impressive report on how funding has recently flowed to technology that “spurs citizen engagement, improves cities and makes governments more effective.” The report is a remarkably easy-to-access look at the 177 investments in this field totaling $431 million invested in this field by corporations, private individuals, and foundations between January 2011 and May 2013.

As with many of Knight’s recent publications, the report innovates in its manner of presentation, showcasing an interactive data visualization map that allows users to explore investments across multiple areas of innovative civic technology.  Network maps enliven the document providing a sense of a growing hive of activity.

On a more elementary level, Knight recognizes that central data on civil society subsectors should be available to practitioners. As Mayur Patel, the foundation’s Vice President of Strategy and Investment, says, “If we are going to participate in markets where we are side by side with others, we’ve got to get better at making the data accessible as to what is actually happening in that market.”

By mapping the field of investors, the Knight Foundation revealed that foundation investors are co-funding projects at a lower rate than angel capital or venture investors. Jon Sotsky, the foundation’s director of strategy and assessment, said he was shocked by the distribution of capital in the space, noting that he did not expect to find so much private investment. Equally surprising, he said, was the fact that the private capital is not investing in open government funding for the most part, and that that is where foundations dominate. 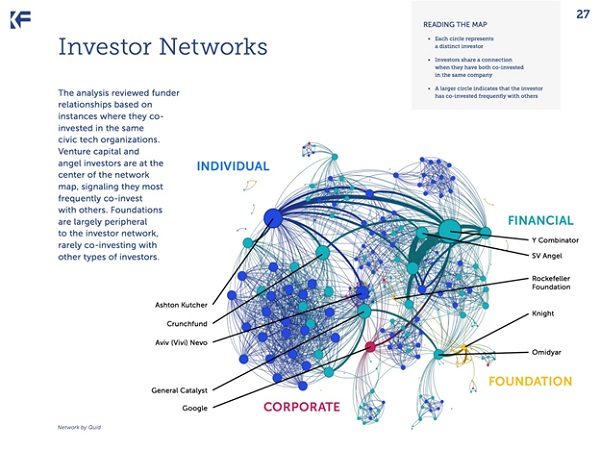 This is the second recent Knight report NPQ has covered that has taken a system-wide look at a field’s revenue flows; the first was the recent report on nonprofit-based news sites, though this one leaves aside any government funding of the field, and it does not look at innovative engagement projects funded by and seated in government. Still, it is an impressive portrait of an emerging field.

The Knight Foundation has been an investor in the area of civic tech for around four years and has invested somewhere on the order of $25 million, according to Patel, and this was “largely in recognition that the ways people were engaging in civic life and the way they interact with government was beginning to shift dramatically and a lot of that was becoming more mediated by technology.”

He said the typology of these organizations has become clearer over time. “We have been investing as a grantmaker and in early stage startups. The startups that have been most effective in this space have been deeply tech fluent. They did not outsource those elements of the work but they have been able to forge strong effective partnerships with municipalities and community organizations.”

According to the report, investments overall in innovative civic technology are divided into two major categories: open government and community action. Here is a network map from the report, which integrates both sides from a revenue beneficiary point of view: 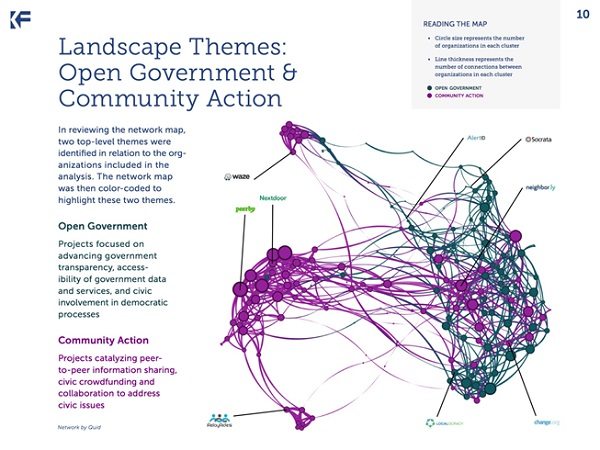 Finding that funding of this type has increased by 23 percent since 2008, the report shows the levels of investments made by funders and, further, shows through easy-to-interpret graphics how much goes to which types of organizations, and who is giving to what kinds of efforts.

The funders are divided into four groupings: foundations, individuals, corporate, and financial. Prominent investors in each category include the Knight Foundation, actor Ashton Kutcher, Google, and the Omidyar Network.

Three core findings, as stated in the press release, are:

This report does not cover the impact of these projects, nor does it discuss the appropriateness of particular revenue streams for various types of work. Instead, it is clearly meant as a threshold effort to help sketch some basics, clarify terms and describe a fast developing field. Patur said they expect that they will be corrected on some details and to watch for more lessons-based information from their grantees next year.