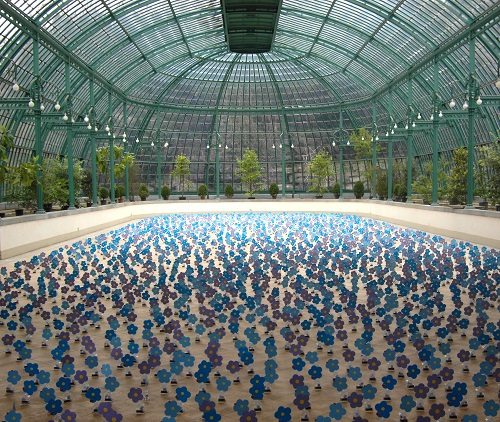 This competition makes good sense to us. The Land Art Generator Initiative (LAGI) just announced the winner of its 2014 competition, >The Solar Hourglass by Santiago Muros Cortés of Buenos Aires, Argentina.

Located in Refshaleøen, Denmark, the function of the Solar Hourglass is, as explained on the site A as Architecture:

“Rather than using sand to measure time, The Solar Hourglass uses the power of the sun to electrify hundreds of homes while providing a breathtaking setting for inspiration and relaxation. The installation consists of an upper and a lower bulb. Dozens of people can gather on the bottom bulb during the day, sheltered by the shade of the top bulb. The project works as a solar central receiver, consisting of an arrangement of small flat mirrors that concentrate their reflection of solar energy on a tank holding a heating medium.”

As stated on its website, the goal of the Land Art Generator Initiative is to “see to the design and construction of public art installations that uniquely combine aesthetics with utility-scale clean energy generation. The works will serve to inspire and educate while they provide renewable power to thousands of homes around the world.” This competition calls for site-specific designs from interdisciplinary teams—art that inspires and educates while also generating renewable electricity to the city at a utility scale.

LAGI has put together a free 73-page guide to the design of renewable energy projects. It’s available here. —Ruth McCambridge